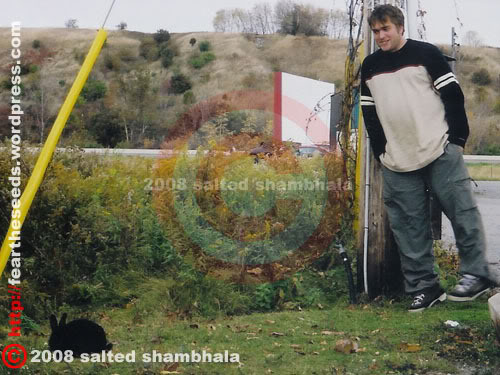 Me stalking the bunny… — photo by Mom

“House Of The Rising Sun”; The Animals
Let me know if the YouTube isn’t available.

The thing about No Post Days I love most is also it’s greatest curse… it’s the versatility, the total lack of constraints on topics I can chose from.

Just this morning I ran through at least three topics before deciding on this one… I’ve got 2,357 songs stuffed into my computer which gives me 154 hours of non-stop and non-repeat listening pleasure. Compared to people like my little brother, who has over 11,000 songs, it’s not much. But even that’s little league compared to Brian Murphy.

Brian was the dude who built the record library for at least two radio stations in Ottawa. His pre-download era record collection was over 14,000 LP’s… then there were the 9,000 CD’s, 10,000 reel to reel’s, and an ungodly amount of cassette’s and eight-tracks all stored in his basement. How many songs is that?

There, see? I totally just changed the topic again…

The thing about technology is the effect it has on a population can only be really understood ten years or so from when it was introduced. Right now we’re starting to get an idea what the effects of the two trillion dollar investment in tech infrastructure between 1998-2000 will be… just before The Burst fibre optic cable was laid across continents and country’s and right up to your doorstep. Then everything went Wireless so what was only available on a desktop suddenly fit in your hand.

So thanks to lightspeed communications, fantastically cheap digital storage and hand-held devices like the iCollection, the PSP, Berries and cellphones — which have become mobile pocket computers — we can now be walking Libraries. Literally.

Here’s the thing… Yahoo!, GMail, Hotmail and even WordPress now offer, for free, Gigabytes of storage per free account. The mobile pocket computer most of us walk around with each have Gigabytes of storage, but also allow us to access all of those free storage accounts. So… just as important as what and where we can Access becomes what’s the limit on what we can store?

In essence, and soon thanks to Google’s decision to digitize every book ever published it’ll be a reality, we can all have our very own Library of Congress stored in a pocket sized device. Think of the power… every song ever recorded tucked away in your account beside every book ever written and you can scroll down to find every work of art by every Master…

Ah, No Post Day, truly You are awesome. For this gift to the World we should all thank Anita.

So if you’re willing to participate the question for today is: how much information do you currently have digitized on your tech devices?

Bonus Points: Does it frustrate you when people write “I don’t know…” in an email or in a post and you kind of feel like you have to reach out and slap them while screaming “GOOGLE IT MOFO!!”?

...diagnosed with manic depression in 1989, for the next 14-years I lived without treatment or a recovery plan. I've been homeless, one time I graduated college, I've won awards for reporting on Internet privacy issues, and a weekly humour column. In 2002 I finally hit bottom and found help. I have an 8-year old son, and a 4-year old son... I’m usually about six feet tall, and I'm pretty sure I screwed up my book deal. I mostly blog at saltedlithium.com....
View all posts by Gabriel... →
This entry was posted in Blogging, crazy people with no pants, Health, Living With Depression, Living With Manic Depression, No Post Day, Punk, Technology. Bookmark the permalink.