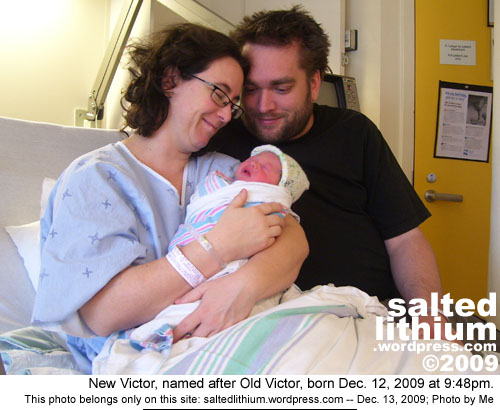 My son is four days old.

My girlfriend’s water broke on Friday, at 9pm. Our plan was to have a friend drive us directly to Ottawa, which would have worked out, but she had unpacked her emergency bag, and as we were stuffing clothes into cloth bags, my girlfriend’s mother arrived and created a panic, so we ended up in an ambulance which took us to the local hospital. On Friday our baby was at 35 weeks and five days. Anything under 36 weeks old means an automatic shuttle to Ottawa.

Because of the hour long drive to Ottawa a nurse took my spot in the ambulance, so I hitched a ride with my friend in her minivan. My mom, who had been at a Christmas party in Ottawa, met all of us at the hospital. Mom and my friend both left soon after arriving… for the rest of the weekend it was just me and my girlfriend.

Mostly Friday night, and early Saturday morning, were spent making plans, signing papers, and making sure my girlfriend kept mobile. They transferred us to the ‘birthing room’ around 2am. We were both exhausted, my girlfriend wasn’t in pain so much as constant discomfort. I did my best to feed us, but the only food available was vending machine crap — the nurse kept offering us toast from a broken toaster.

I stood by my girlfriend’s bed for as long as I could, holding her hand, talking to her, stroking her hair, keeping her smiling.

My own emergency bag consisted of my medications, a notebook, some pens, my extra batteries and their charger, a big bag of change, and my camera.

I decided the first night I wasn’t going to take my Seroquel. The eight hours of sleep it gives me, I felt, would’ve made me too groggy to react to anything going wrong with my girlfriend. But, by 3am, I was too exhausted to stand anymore and fell into a deep sleep without the meds, on a low pullout chair.

For most of Saturday the nurses and doctors came and went, they monitored the baby’s heartbeat, the contractions, my girlfriend’s blood pressure. As time went by I could tell everyone was getting more serious. My girlfriend was getting more and more nervous about a natural birth, but the nurses kept her on track.

Eventually it came time to have the epidural inserted, which meant putting a small needle into my girlfriend’s back… she has a significant phobia, and managed to work herself into a panic attack which, thirty minutes later, resulted in her blood pressure crashing to the point the nurses were calling for an emergency response.

But, after a few moments of intense quiet, and a cold wash cloth, everything got better quickly.

An hour or two later I started to stagger around the room because my sugar was crashing. I really thought I was going to hit the floor, but while I was staggering around I kept making jokes to keep my girlfriend smiling. I ended up drinking half of her Coke, and eating some trail mix, and improved pretty quickly.

My blood sugar was totally fucked the entire weekend.

The doctors waited until 4pm before deciding they’d induce the pregnancy. My girlfriend went twenty hours at 3cm dilated. Within two hours of pumping the drug into her, my girlfriend was in labour. It seemed to happen really quickly. The doctor was coming in every thirty minutes to check my girlfriend’s status, then the doctor called for the nurse to bring some surgical blankets because the cervix was at 10cm, and everything just started.

My job was counting, holding my girlfriend’s hand, keeping my face close to hers, and keeping the camera aimed properly.

I did film the last twenty minutes. It came out pretty cool… definitely NC-17 though.

After the baby was born the doctor handed me some scissors and told me to cut the umbilical cord. I filmed that as well. And I kept the scissors… I actually stole them because the nurse said “no” when I asked if I could have them.

My girlfriend held him while he was still messed up, after they cleaned him up they handed him over to me.

Because he was considered a “preemie” they put him in the NICU for six hours, so while my girlfriend was cleaned up and moved to the maternity ward, I sat with him for as long as I could. But I was still exhausted, so by 2am I was in my girlfriend’s room making sure she was alright.

It was a two-bed room, but the nurses wouldn’t let me sleep in the empty bed. So I slept on the floor beside my girlfriend. The nurse did give me two pillows and a sheet. At 4:30am our son joined us, but I was too tired to wake up.

I came home Sunday night, my girlfriend and our son came home on Monday. We’ve been showing him off ever since.

Some observations… mostly father’s are seen as a necessary evil on the maternity and labour-delivery wards. We’d be walking the halls, searching for orange juice and bendy straws, the nurses only referring to us as “father”, none of us having slept in days… I totally understand, but Jesus, on the floor?

If the nurses had their way I think the father’s would be watching the whole thing at home using a web cam, with the volume control in the nurses’ pocket.

Any emergency pregnancy bag must include food… sandwiches, trail mix, power bars, anything. Guaranteed, if the hospital has a cafeteria, it’ll shut down when you’re hungriest.

If you spike your hair, I definitely recommend Fructis Style Gel Spray: Extreme. I went from Friday morning until Sunday night without getting access to a shower, and my hair was freaking perfect.

A change of clothes would’ve been a good idea. The only shirt in the gift shop in my size was a bright, canary yellow.

Get out of the room when you have an opportunity. I spent a lot of time wandering the halls of the empty hospital in my socks, and walking around outside wearing only my T-shirt. The cold helped keep me awake and alert.

Bring running shoes… I spent the entire weekend with only my steel-toed winter boots. On Sunday night, when I got home, my ankles swelled up like cantaloupes.

Do anything you possibly can to keep your girlfriend’s mind at ease. At one point we were walking the halls with an IV attached to my girlfriend. So I started to grab bits of Christmas decorations and decorated the IV tower she was dragging along. She really liked that, and we managed to get two of the balls home. They’re on her tree now.

There were only thirty minutes or so, in total, where things got weird. The rest of the weekend moved along fairly efficiently. Of course I’ll write more about this, but right now I’m exhausted and I have to take my girlfriend’s garbage and recycling to the curb.

Then, when I wake up, my girlfriend has some errands to run, and would like to take a long nap, so my son and I are going to hang out and watch Star Wars.

...diagnosed with manic depression when I was nineteen, for the next 14-years I lived without treatment or a recovery plan. I've been homeless, one time I graduated college, I've won awards for reporting on Internet privacy issues, and a weekly humour column. In 2002 I finally hit bottom and found help. It's now 2022, and I have an 8-year old son, and a 12-year old son... I’m usually about six feet tall, and I'm pretty sure I screwed up my book deal. I mostly blog at saltedlithium.com....
View all posts by Gabriel... →
This entry was posted in crazy people with no pants, CSG, Health, Little Victor, Living With Depression, Living With Manic Depression, Mental Health, Pregnancy. Bookmark the permalink.