“My Favourite Game”; The Cardigans
Let me know if the YouTube’s missing…

Fifty centimetres of snow dropped on my Little Village yesterday. Depending on who you ask, or which metric to Imperial measurement conversion site you use, that’s about 22 inches of snow. The wind was gusting up to 130km/h which is around 80mph. My neighbour is one of the dudes who drive the big snow removal machines, and he told me some of the more country-like roads around here had mile long drifts of ten feet of snow. Of course most roads here are country roads…

My roof did not cave in, the power never even flickered, the Cubans and their Soviet masters didn’t invade and I didn’t run out of Diet Pepsi… but, more importantly, I remembered how much I love snow.

I fucking love snow. Really. Honestly. I fucking Love snow. I spent a couple of hours walking around during the “Weather Event” in snow up to my knees and sometimes higher… the snow was mostly ‘falling’ horizontally, actually it wasn’t so much snow as little stinging balls of hate. There’s this bizarre Urban Myth about the Inuit having seven-bazillion words for Snow, and how much richer their language is for having such precision. But it’s absolute bullshit. Those languages (there are several) have the same basic number of words for snow as there are in English. Every thing else are adjectives.

Heavy snow, wet snow, packed snow, fluffy snow… I love them all. But what I couldn’t understand was why the forecasters and Weather People seemed to almost deliberately refuse to use the B Word… no one called this thing a Blizzard. I kept hearing “Monster Storm” and “Severe Weather Event” and even “Extreme Snowfall”, but until tonight when the CBC finally used it there was no mention of a Blizzard. 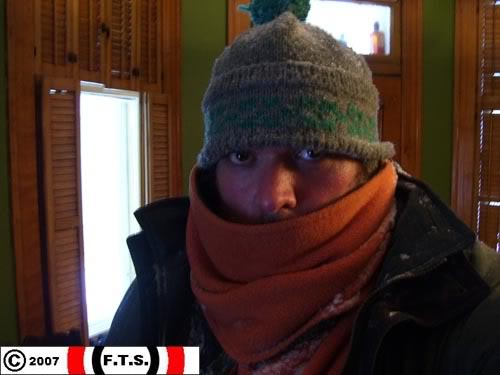 It’s entirely possible that it has been so long since we had a Really Good Blizzard around here the Weather People forgot about the word. We’ve had a couple of Green Christmases in a row, last January my step-father and I were building a porch under a bright and warm Spring-like day. I was actually very comfortable in shorts and a T-shirt. After that it got really cold and there was some snow, but nothing major. If you can still use the bottom three stairs on your porch it’s not a Real Snowfall.

I figure “Extreme Weather Event” comes from three sources: ratings; the week long anticipation of a Storm making its way from the Central United States north to Central and Eastern Canada, and; people have a tendency to forget which country they’re in… most of the people I saw interviewed and doing the interviewing for this story came from Toronto. Now, Toronto can get cold in the winter. But I lived there for six years or so and I think I stepped outside twice. Torontonians do not go outside in the Winter. They live in their cars, taxi’s, subways, underground walkways and Clubs.

At least the ones who are on TV warning us about this thing called a “Weather Event” which may, quite possibly, kill everyone it touches.

Canadian Weather below the 60th parallel runs from 40C to -40C (105F to -40F), I can survive the pluses but it’s the minus part I really like. You can’t dress for heat and humidity. The colder it gets the thicker the sweater you pull out of the trunk. So far this Season has been great for snow even though Winter doesn’t officially start for another couple of days… two weeks ago we received 30+cm of snow and now this. We only get Blizzards once every few years though… it’s a shame.

So… I survived the Blizzard Of 07. I’m thinking about getting T-shirts made up.

...diagnosed with manic depression in 1989, for the next 14-years I lived without treatment or a recovery plan. I've been homeless, one time I graduated college, I've won awards for reporting on Internet privacy issues, and a weekly humour column. In 2002 I finally hit bottom and found help. It's now 2022, and I have an 8-year old son, and a 12-year old son... I’m usually about six feet tall, and I'm pretty sure I screwed up my book deal. I mostly blog at saltedlithium.com....
View all posts by Gabriel... →
This entry was posted in Bipolar, Bipolar Disease, Bipolar Disorder, Canada, crazy people with no pants, Depression, Entertainment, Health, Humor, Humour, Lithium, Living With Depression, Living With Manic Depression, Manic Depression, Ottawa, Punk, Toronto, YouTube. Bookmark the permalink.

9 Responses to Snow Job Part Two: Reclaiming The B Word

Learn to thrive and be positive with bipolar disorder.

Bipolar: A Way Of Life

In Recovery with Bipolar and BPD

Here is a blog about the incredible journey of my life!

Be You Very Well

Learning to live by being who I am, and being that well.

Life ain't all burritos and strippers my friend.