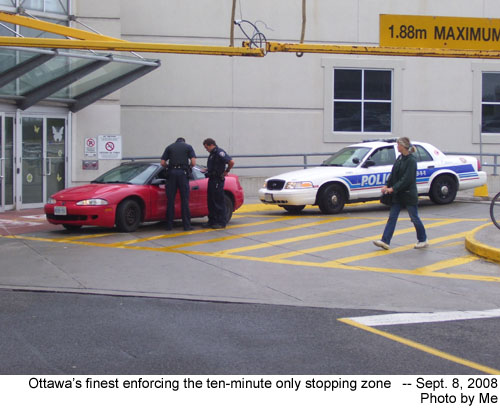 I met some bloggers for brunch in Ottawa recently. This is the second time I’ve met people face-to-face who only know me through this blog, which is something I didn’t think I’d ever do again. I mostly went because I was invited by Zoom!, whose blog I really enjoy, and since there have been no night terrors since the brunch, I’d call the entire event a rousing success.

As a means of judging how far I’ve progressed in my recovery I’ve been really interested to find out how I’d act and react in a group of people, and finding out in a group of strangers seems to make more sense than surrounding myself with people I do know only to find out that, when it’s not my turn to speak, I drool.

The brunch was a lot more informal than I initially thought. When I was first invited I figured it would go one of two ways… either we’d be standing up and mingling so when I dropped my glass of orange juice it would have some time to build up momentum before crashing into the carpet.

Or we’d be sitting around a collection of tables and the discussions on either end would occasionally be interrupted as I, somewhere in the middle, would again and again drop egg-yolk into my lap.

It was a lot more of the latter but I skipped the eggs and went with the smoked salmon on a bagel and a bowl of mixed fruit. I was nervous going into the brunch, but not overly so… at least not as nervous as I thought I would be when I was first invited.

I did actually stand just down the street from the restaurant, under an overpass so I’d be out of the rain, for ten minutes before walking into the restaurant. But I think that was equal parts nervousness and thinking it was something I was supposed to do.

Generally when I’ve had time to think about meeting new people, especially in groups, I’ve tended to over think everything and will plan conversations to the gesture. But this time I just watched the scenery flash by on the bus ride to Ottawa. I do remember being nervous, but only feeling like… like I had a three too many cups of coffee.

I think some of my nervousness was calmed by the fact everyone was anonymous. Some of the bloggers had met before, but never as part of this specific group. It was very much like two or three degrees of separation between everyone else at the table… kind of like A knew B, C and D; B knew X, Y and Z; Y knew C, N and O and I was 4.

It was interesting being introduced to people by their “code names”, as if none of us were quite comfortable enough or quite ready to have our blogs connected to our real world selves, so that even as we meet in the real world it’s easier to hide behind false identities.

We did all use our real first names, I think because otherwise it would’ve felt too much like a grade nine game of Dungeons & Dragons where everyone was trying to remain in character. But I think having to identify myself by saying “Gabriel… I write Salted Lithium” instead of “I’m Gabriel Blahblah” gave me a bit of a safety barrier so I didn’t have to feel so exposed.

Getting the invitation in itself meant a lot… having people see enough value in this blog that they’d want to meet me makes me feel kind of tingly. This past couple of weeks have been strange like that. I’ve received a lot of positive feedback since I started Salted, but it’s only recently where said comments are starting to feel good. My own particular brand of introversion tends to turn “positive feedback” into… well, basically threats. So when normally good things happen, like my blog-hits spike, I’ll stop posting or turn Salted off to search engines.

Natalia, for example, recently wrote something complimentary the other day about a comment I left, and ExChimp just wrote a post where he mentioned the possibility of me actually knowing what I was talking about, both of which have left me feeling pretty freaking good… I’m still smiling about them. At the brunch itself, however, there were people who not only knew about my blog, but who also spent time at the other end of the line of table talking to other bloggers about this blog. Which totally blew me away.

The only other time I’ve ever heard someone say the words “Salted Lithium” has been when I’m speaking with my psychiatrist. It’s just something that has never happened to me before… like ever. I do get a lot of positive feedback in comments and emails about Salted, and they all mean a lot to me, but actually hearing people speak about this blog and tell me how emotional they’ve gotten while reading… it just blew my mind.

Mostly we spent the brunch talking about the random things we all blog about. I don’t think, other than the actual meeting-physically part, the brunch had any serious purpose. At least no Associations were formed, although we did have tiny name tags.

I was the only person not currently living in Ottawa who was there, and I was also the only person invited who doesn’t write about stuff happening in Ottawa, but I did meet someone who is not only friends with some of my offline friends, she has actually visited my town from time to time. That was weird and random.

I did really enjoy meeting everyone, and I didn’t spill anything on my pants or anyone else’s, even so I’m not sure I’d do something like this again… but if Zoom! asks I probably would.

Actually, now that I’ve thought about it a bit, I think the main reason I’ve never done something like this before is most of the people I blog with are just too far away… interesting.

…the taxi to the place where I catch the bus to Ottawa is twenty bucks, so my mother drove me. The way she was acting as we were waiting it felt very much like my first day going to school on the Big Boy bus.

She was pretty excited about me getting out as well, once I mentioned to her some writers wanted me to join them for a meal she got practically giddy… she’s been (sometimes) gently pushing me to join some groups around here, or ideally find something to do outside of this region for a while now.

She’s even gotten so concerned over the past year about my isolation that over the occasional Sunday dinner she’ll mention something in passing about maybe setting me up with someone from her office. Only not so much “in passing” as “here’s her card and my cellphone”.

...diagnosed with manic depression in 1989, for the next 14-years I lived without treatment or a recovery plan. I've been homeless, one time I graduated college, I've won awards for reporting on Internet privacy issues, and a weekly humour column. In 2002 I finally hit bottom and found help. I have an 8-year old son, and a 4-year old son... I’m usually about six feet tall, and I'm pretty sure I screwed up my book deal. I mostly blog at saltedlithium.com....
View all posts by Gabriel... →
This entry was posted in Bipolar Disease, Bipolar Disorder, Blogging, crazy people with no pants, Health, Salted Truths. Bookmark the permalink.

15 Responses to We Should Probably Keep Meeting Like This