If I Win I’ll Let You Touch My Beaver 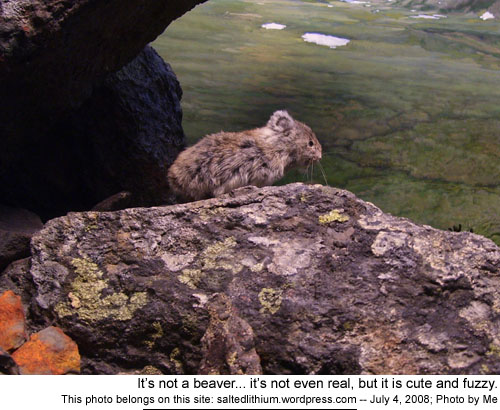 Salted Lithium has made it into the Final Five in the Best Health Blog category of the Canadian Blog Awards. Which means at least two people voted for my little blog because I voted for Kenn.

Honestly, my sincere thanks to everyone who took the time to vote… and just to clarify, people outside of Canada are allowed to vote, and the winner gets to put a smiling cartoon beaver in their sidebar… because the national symbol of Canada is the beaver. Which is just awesome.

So I’ve just voted for myself. Which didn’t feel nearly as awkward as I thought it would. If anyone else wants to see a smiling cartoon beaver in my sidebar I suggest voting as well. Time’s up on Dec. 6, and hopefully the winners of the smiling cartoon beaver will be announced the next day because I want that beaver in my hands as soon as possible.

Some friends of mine also made it into the second round. Unfortunately Hella Stella wasn’t one of them, so she won’t have a smiling cartoon beaver in her sidebar. I blame communists. If you’re going to vote in other categories I suggest choosing:

Zoom! for her Knit Nut blog, which has made it to the Final Five in three categories: Best Local Blog, Best Activities Blog and also in the Best Personal Blog Category.

Robin has also made it to the Final Five in the Best Photo/Art Blog Category for his blog Watawa Life.

And XUP made it to the Final Five as well in the “Best New Blog” category, but I’m pretty sure there was some money involved.

There are a couple of the blogs in the Health Blog Final Five I’ll be putting into my sidebar… just, you know, after I win the beaver thing. The other nominees are: Weighty Matters; Ottawa Street Dental; nurse turned writer, and; Canadian Medicine. GAME ON!

One of the Health Blogs which was nominated but didn’t get to the Final Five is Facing Autism In New Brunswick, and it’s now in my blogroll. So I’d definitely recommend his blog.

If you do decide to vote for me, here’s where you do it:

...diagnosed with manic depression in 1989, for the next 14-years I lived without treatment or a recovery plan. I've been homeless, one time I graduated college, I've won awards for reporting on Internet privacy issues, and a weekly humour column. In 2002 I finally hit bottom and found help. I have an 8-year old son, and a 4-year old son... I’m usually about six feet tall, and I'm pretty sure I screwed up my book deal. I mostly blog at saltedlithium.com....
View all posts by Gabriel... →
This entry was posted in Awards, Bipolar Disease, Bipolar Disorder, crazy people with no pants, Health, Living With Depression, Living With Manic Depression, Manic Depression, Ottawa. Bookmark the permalink.