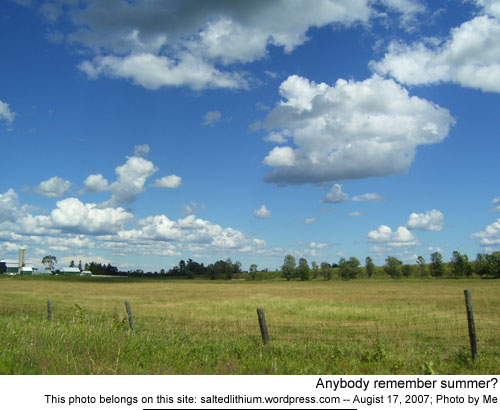 This is something I’ve been planning for a few months. The basic problem with blogs is the more you write, the more gets left behind in the archives. So a few times a month I’m going to leave excerpts from my original posts which I think can really help people who are just starting out on their recovery, then link them to the original so maybe someone can also find something useful in the original discussions.

For this inaugural Old Post Day I’ve chosen one of the very first pieces I ever wrote about manic depression, it was originally posted on November 18, 2006. The title is a line from “Lovers In A Dangerous Time”, a song by Bruce Cockburn…

“kicking at the darkness until it bleeds daylight”

Recovery is about epiphanies — little truths made into strong emotions by the very fact we missed out on the frigging thing in the first place, which means we’ve been living in one direction when a simple truth would have had us going in the right direction.

Manic depression makes you confused, it feels like depth but manic depression is a very shallow disease, it’s ‘horizontal’ not ‘vertical’ like a cancer. When you get cancer you know where it is and roughly whether or not you’re going to survive it. Someone with our disease could, quite literally, be dead ten minutes from now (don’t do it) or we could survive wrapped up in a ball in a corner until we’re ninety-nine.

Depression is a thin coating, it’s a thin sheet of reflective ice concealing an ocean. It corrupts our ability to Reason, and without that ability we can’t defend ourselves against the thoughts inside our heads, so we find excuses we can live with. People with our disease are excellent at rationalizing unreasonable behaviour to fit situations we can’t understand.

The disease makes you believe, unconditionally, that you are in charge. So when you’re staring into that reflective ice covering thinking it’s you making the decisions based on reason and deliberation in fact — unmedicated or newly medicated — every decision you make is corrupted by the disease.

The posts I wrote during my first year on Salted were very aggressive… I was coming to terms with the disease, and the effect it had on my life during all of the years I was untreated.

I firmly and absolutely believe we have to get angry at the disease… in the end the anger we throw at ourselves and the people around us in the belief either we or they are at fault only holds our recovery back.

Which is why I love that line from Bruce’s song… you kick that darkness until it bleeds daylight.

There wasn’t much of a conversation with this one… there was actually only one response. But there is a lot more to this post, if you’d like to read it just click on the link. And maybe let me know if this “Old Post Day” thing makes sense.

...diagnosed with manic depression in 1989, for the next 14-years I lived without treatment or a recovery plan. I've been homeless, one time I graduated college, I've won awards for reporting on Internet privacy issues, and a weekly humour column. In 2002 I finally hit bottom and found help. I have an 8-year old son, and a 4-year old son... I’m usually about six feet tall, and I'm pretty sure I screwed up my book deal. I mostly blog at saltedlithium.com....
View all posts by Gabriel... →
This entry was posted in Bipolar, Bipolar Disease, Bipolar Disorder, crazy people with no pants, Health, Manic Depression, Old Post Day. Bookmark the permalink.

8 Responses to Old Post Day | kicking at the darkness