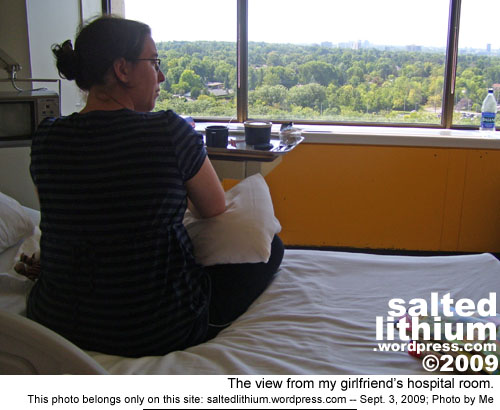 My girlfriend came home on Tuesday night. She spent six days in the Ottawa General Hospital for observation and tests because there’s a very real possibility of her pregnancy ending before our child can survive outside her womb.

That risk hasn’t gone away. If anything it got worse during her time in the hospital. The doctors now believe it is a matter of weeks, not months, until the baby is borne. The official due date is January 10, 2010. Unofficially it’s now late October or early November.

Two months ago my girlfriend underwent a procedure called a “cerclage” — which is a surgical stitch or clamp placed around the cervix. Some women have what’s called an “incompetent cervix”, it basically means the muscle is too weak to hold the baby in place. So when the baby grows, the pressure on the cervix becomes too grate, and the result is a miscarriage.

Basically, it’s the premature opening of the cervix.

My girlfriend lost two children, one in the second trimester, and the second towards the end of the third, before having her son — who survived to full term thanks to a cerclage.

Even with a cerclage there are risks. In our case, the cerclage has slipped. To get an idea as to what’s going on, hold your hand straight out with all of your fingers pointing down and squeezed together. That’s the cervix. Now wrap the thumb and forefinger from your other hand around your fingers between the top and middle knuckles. That’s the cerclage where it’s supposed to be.

To make things entirely worse, all of that empty space between the top of the cervix and the cerclage has now been filled with the baby’s sac. The baby itself is now too big to slide through, but the sac of fluid surrounding him has slid into the space, and is pushing down on the cerclage.

The hospital visit was also meant to give my girlfriend a quiet, stress free place to give her body time to heal. The cerclage itself is very painful, especially when it’s sliding around inside her. But the baby is making things worse for itself by being extremely active.

But it turns out my girlfriend is allergic to quiet. She was going stir-crazy by the second night. She was combative with the nursing staff — albeit, in some cases, with good reason. She was alone in a room, on a ward filled with newly borne babies and happy families.

So on the sixth day, as soon as the last doctor told us being home wouldn’t cause any more damage — as long as she stayed close to her bed and away from stress, we brought her home. She’s been sitting reclined in her chair, watching The Wire and eating walnuts ever since.

Personally, I think she should still be in the hospital. I’m pretty sure the doctors wanted to keep her as well, I’m almost positive they expect her back sooner rather than later. I got incredibly frustrated with my girlfriend every time she talked about getting out and going home.

We are going back in ten days for a steroid shot which will help our kid develop lungs. That’s the basic necessity at this point… our kid has to grow lungs. His heart is strong, his head and stomach are now two weeks ahead of schedule. The pregnancy is four days into its twenty-second week. The bare minimum number of weeks, where the kid will have just a shot at living, is twenty-six.

So this is a four week race where my girlfriend can’t move.

So far I’ve managed to take care of most of the day-to-day stuff. But her friends are pitching in, mostly in taking care of her three-year old son. I haven’t explained much of this to her soon-to-be-ex-husband (STBEH), but I have explained to him that I’ll be very pissed off if he upsets my girlfriend at all. So far he’s been on time and helpful.

The past few days have been fairly smooth all around. I think my girlfriend is starting to get a little stir-crazy again. So tomorrow I’ll be taking her for a walk around the yard.

...diagnosed with manic depression in 1989, for the next 14-years I lived without treatment or a recovery plan. I've been homeless, one time I graduated college, I've won awards for reporting on Internet privacy issues, and a weekly humour column. In 2002 I finally hit bottom and found help. I have an 8-year old son, and a 4-year old son... I’m usually about six feet tall, and I'm pretty sure I screwed up my book deal. I mostly blog at saltedlithium.com....
View all posts by Gabriel... →
This entry was posted in Bipolar Disease, Bipolar Disorder, crazy people with no pants, CSG, Health, Living With Depression, Living With Manic Depression, Manic Depression, Mental Health, Pregnancy. Bookmark the permalink.