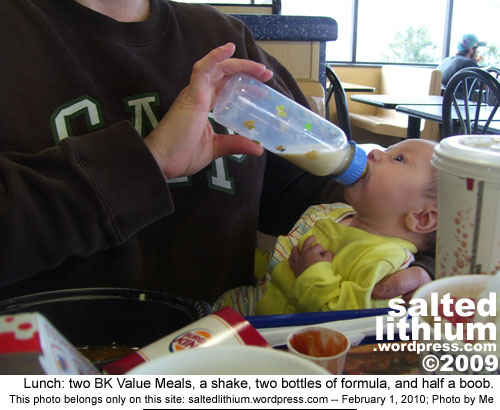 There were two milestones in my sons life this week… he turned two months old, and he now weighs in at over ten pounds.

Not bad for a preemie. Victor was born a month early, and weighed 6lb 9oz. He was nineteen inches long at birth, I’m not sure how ‘tall’ he is now, but my girlfriend — who also has a four-year old son — seems impressed.

Victor also spent the week staring at everything. He’s definitely aware of his surroundings, even from a few feet away. I caught him staring at his hand a few days ago. Yesterday, while my girlfriend was feeding him, he couldn’t stop staring at me… even when I got up and started walking away.

He’s still using his tongue as an exploration tool. Sometimes he’s like a little lizard, tasting the air, or his lips, or his jumper, searching for clues to his surroundings. He doesn’t know how to use the rotation of his head to help him see things, yet. So, if I touch his ear, his eyes swivel all the way to the edges of his cheeks, and he gets a look of deep curiosity on his face.

And his face is incredibly expressive. Until recently the only truly recognizable expression has been from the pain he gets from bodily function stuff, or when he’s hungry. But a few days ago my girlfriend found a stop under his chin that, when she strokes it, almost guarantees he’ll laugh.

And he’s happy a lot. I think that’s how he spent most of this week. My mom looked after Victor on Tuesday evening, she couldn’t get over the noises he’s making now. Just watching him move his arms, his head and his mouth in unison, and listening to him… coo, I guess, you’d swear he was trying to say something.

I had him to myself for a couple of evenings, and Victor and my girlfriend moved in with me over the long weekend (her older son was with his father). It was nice… even comfortable to be a family unit for a few days.

And then, I think it was Friday night, we found out Victor has started grabbing, and holding, stuff. We have a couple of little stuffed toys, one has a plastic rattle, and we’ve been leaving them in his basket. My girlfriend has been gently shaking the rattle toy — it’s a little multi-coloured elephant — in front of Victor’s face, and making those cute noises mothers make.

On Friday night we were watching a movie and heard the brief sound of the rattle coming from the basket. I think we’ve quickly become ‘those parents’, the ones who jump at every new sound. I definitely know my girlfriend is one of them. By the time I got my camera turned on, as well as some lights, he was still playing with the toy, just not as much.

Victor managed to keep all of his food down this week, he hasn’t spewed since early last week. However, he has been incredibly… lets call it ‘gassy’, for a few days. Right now he’s split pretty evenly between breast and bottle. My girlfriend, her friends, and I are seeing Victor’s teeth forming. I do not envy my girlfriend at all with them coming in, Victor’s already causing her a lot of pain with just his gums.

It’s a little odd, we do have a very expensive breast pump, but she doesn’t like using it. She had her first return appointment at the Ottawa General Hospital on… Monday, I think. She had a physical, then spoke for a couple of hours with the psychologist. It helped, a LOT. She’s been very relaxed, and slept great, all week. She’s going back next week.

Victor and I watched a tonne of movies this week. We watched ‘Bullitt’ for the third time because his mommy hadn’t seen it yet. Steve McQueen’s character is based on an actual San Francisco cop named Dave Toschi. Mark Ruffalo played the same guy in ‘Zodiac’, and Clint Eastwood used him as inspiration for ‘Dirty Harry’.

I tried explaining all of this to Victor but he just wanted to watch the movie, not talk about it.

On television we managed to catch pieces of ‘Blazing Saddles’, ‘Anchorman’, ‘Wedding Crashers’, ‘In & Out’ and all of ‘Charade’ with Audrey Hepburn and Cary Grant. We also saw this great black and white movie about the Berlin Airlift called ‘The Big Lift’. It was filmed in 1950 inside war devastated Berlin, and used real soldiers and Berliners as extras, the main character is played by a very young Montgomery Clift.

The movie is surprisingly aware of what people had to do to survive post-war Germany, with great philosophical debates regarding the roll of German civilians during the holocaust, and how hypocritical America was in fighting for the liberation of European Jews, while denying them rights back home. Great movie.

Then, for Valentine’s Day, I picked up three romantic movies for a theme night… ‘Bottle Rocket’, a 1996 film directed by Wes Anderson, and starring Owen and Luke Wilson; ‘Patch Of Blue’, a b/w 1965 film starring Elizabeth Hartman and Sidney Poitier, and; ‘Charly’, a 1968 movie starring Cliff Robertson.

The theme’s a little obscure, but they’re all love stories involving someone who is disabled… Luke Wilson has just walked out of a mental hospital, where he was being treated for severe depression; Elizabeth Hartman plays a character who is blind, and abused by her prostitute mother, and; Cliff Robertson plays a mentally disabled man who falls in love with his teacher.

We haven’t actually seen ‘Charly’ yet. But both Victor and my girlfriend really enjoyed the other two.

New music this week: The Fugees and Jethro Tull… Victor is now deep into rock flute, and he literally crapped his pants when he heard Lauryn Hill sing “Killing Me Softly With His Song”. But I think that’s what we all did the first time. Tru dat.

...diagnosed with manic depression in 1989, for the next 14-years I lived without treatment or a recovery plan. I've been homeless, one time I graduated college, I've won awards for reporting on Internet privacy issues, and a weekly humour column. In 2002 I finally hit bottom and found help. I have an 8-year old son, and a 4-year old son... I’m usually about six feet tall, and I'm pretty sure I screwed up my book deal. I mostly blog at saltedlithium.com....
View all posts by Gabriel... →
This entry was posted in Bipolar, Bipolar Disease, Bipolar Disorder, crazy people with no pants, Health, Little Victor, Living With Depression, Living With Manic Depression, Manic Depression, Mental Health. Bookmark the permalink.