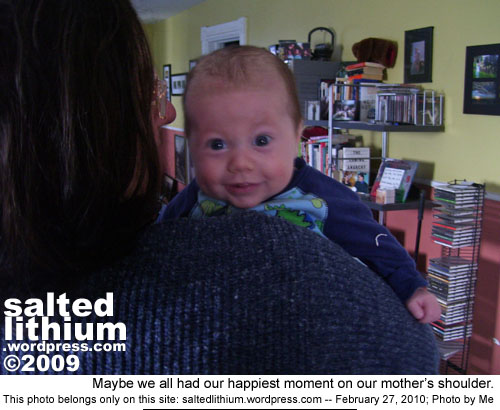 It was an odd week. On Thursday night my girlfriend, son and I were in Ottawa for her last appointment with her psychologist at the Ottawa General Hospital. Getting there was fine, no problem. Getting home meant driving down an exposed country highway, through a blizzard of wet, heavy snow in the pitch dark and with winds gusting up to 70km/h.

The three of us were packed into my girlfriend’s mostly broken Mazda with dim headlights and tires with just enough tread that they’re barely legally considered winter tires.

At times there were no lanes. There was a long line of traffic for the first third of the trip, so with mostly everyone staying in the ‘slow lane’ there was a relatively easy track to follow. But, after that first third, forget it. We were mostly on our own, and the wet, thick snow was mostly frozen at that point.

There was no place to pull off either. We passed six cars that were in the ditch, but even if we wanted to stop the highway’s shoulders were six inches deep in the kind of snow cars don’t come back from.

I did my best to help navigate — which mostly consisted of me shutting the fuck up — but I spent most of my time wondering what the hell I was going to do with Victor if we went into the ditch. My girlfriend has a survival kit in her trunk, but the lock to her trunk has been broken for months. Neither of us have a cellphone.

The rest of the time I was wondering how much longer I could hold out with a full bladder. It took almost four hours to get home, but we got there safe and sound… holy crap.

Victor, thank God, slept the whole way. He never woke up, never said a peep. Which is amazing considering it was his first crisis. The kid is cool under pressure.

I’m taking care of my son in a few hours, so I don’t have a lot of time to elaborate too much on our adventures this week.

Victor’s mother, my girlfriend, started working with her father again this week. So for three days a week, four hours a day, she’ll be hauling wood and cleaning gutters. Nothing glamorous about it, but she’s been feeling a little stir crazy lately.

It’s only for March, after that her boss at the convenience store (where we met) will be giving her just enough hours so as to not effect her maternity leave. It’s not just something to do, she also needs the money. She bought a car off a friend of mine for $500, and it needs about the same in new (ish) parts.

It was cheap more out of necessity for my friend, not so much the condition. It’s a 10-year old, dark blue Ford, and a definite upgrade over my girlfriend’s 12-year old dirt-beige Mazda.

Which means Little Victor gets to ride around in style, and with a stereo that doesn’t turn off with every bump.

I think he’s enthused about it, jazzed even. In fact, he’s been happy all week.

Victor and I spent a large chunk of the week together, and he got to watch his daddy do two things he hates equally… clean his apartment and deal with an abscess in his mouth — I’ve been taking mega-doses of penicillin, and way too much Tylenol and Advil. The abscess is gone, but I’m pretty sure I’ll lose the tooth anyway.

Little Victor and I had way, way too much time on our hands this week. We watched a tonne of movies, and listened to a lot of music together — he was gurgling while I was cleaning. I also showed him some of my favourite videos on YouTube, but so far he hasn’t shown the slightest interest in Tiffany Amber-Thiessen.

Mostly he seems to be into the funny cat stuff… actually, he really just stares at stuff on my desk and tries to punch my keyboard. But I figure he’ll have his own website in a few months.

The kid is growing exponentially. He was 6lbs 9ozs when he was born, ten weeks later he’s eleven pounds. And he definitely has eyebrows now, so there’s starting to be some definition between face and forehead.

Victor and I listened to my Cleaning Up mix a lot this week… which includes a surprising amount of Miles Davis, Richard Strauss, Vivaldi and Bach. Victor seems to like the waltzes. I also got him moving to Chick Corea, Oscar Peterson and Charles Mingus.

There was also some ‘Flaming Lips’ and Amy Winehouse. Other than Oscar, I didn’t play as much Canadian music for him as I wanted to, maybe this week. I’m not sure if he’s ready for punk yet, I think it’d be a lot of yelling for a little dude to handle.

It turns out the “Poultrygeist: Night Of The Chicken Dead”, the 2006 release from B-movie legend Lloyd Kaufman (“The Toxic Avenger”), is a musical. When Victor and I were choosing movies at the videostore, we didn’t know that. Which was great, because I generally avoid the genre, and Poultrygeist turned out to be pretty awesome.

We also watched Alec Baldwin, Maria Bello and William H. Macy in “The Cooler” (2003), in indie movie set in Las Vegas just before it turned into Disney South. It’s mostly about the redemption of someone who is clinically depressed. All three performances were incredible. We tried watching “Glengarry Glenross” as part of a Baldwin Double Bill, but Victor got a little cranky.

…earlier in the week we sat down together and watched “Donnie Darko”, the 2001 cult classic starring Jake Gyllenhaal and way, way too many other people. Drew Barrymore? Really? Patrick Swayze? Seriously, WTF?

It was the first time for both of us.

The movie is incredible for what it could have been — an examination of a breaking or broken mind, and the fun associated with universes diverging in the night. But, for what it was, it’s deeply, deeply flawed. There were just too many side plots, so the relationship between Donnie and Frank just gets run over. Heh. Whoops. Spoiler alert.

One thing about the movie… I definitely want a Frank doll for Victor.

...diagnosed with manic depression in 1989, for the next 14-years I lived without treatment or a recovery plan. I've been homeless, one time I graduated college, I've won awards for reporting on Internet privacy issues, and a weekly humour column. In 2002 I finally hit bottom and found help. I have an 8-year old son, and a 4-year old son... I’m usually about six feet tall, and I'm pretty sure I screwed up my book deal. I mostly blog at saltedlithium.com....
View all posts by Gabriel... →
This entry was posted in Bipolar, Bipolar Disease, Bipolar Disorder, crazy people with no pants, Health, Little Victor, Living With Depression, Living With Manic Depression, Manic Depression, Mental Health. Bookmark the permalink.