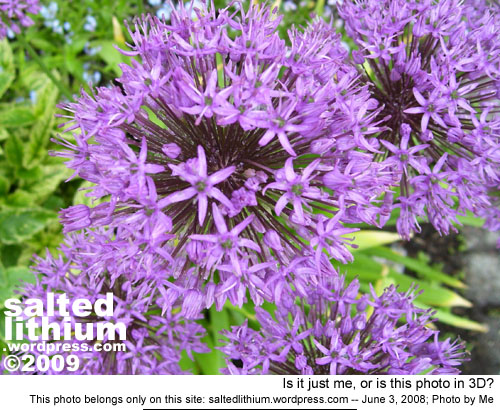 Over the past three days I’ve been getting progressively more freaked out because someone has been spending a lot of time reading my blog. Like, a lot of time… as in, by the time I’ve published this post, the person will have read everything I’ve written on Salted.

That’s 287 posts… in three days, at an average of 1000 words per post. And not one comment. A couple of years ago someone did pretty much the same thing and I shut my blog down for a week. I turned the privacy settings up to maximum last night, hoping they’d piss off, but when I turned it back down to normal, there they were again.

When I was still running my “news” blog I really enjoyed watching the blog counter tick upwards. Not so much with this one. I keep thinking it’s inevitable I’ll see pieces of my life used as storylines in Law & Order, or CSI… or, worse, a Canadian TV drama, or a Canadian indie movie starring Sarah Polley.

They’re still going, whoever they are… they just ripped through five posts in less than a minute.

My “news” blog, by the way, was only updated regularly for four months, I stopped using it two years ago, and it still gets twice the “hits” as Salted.

There’s something irrationally depressing about that. I need the feedback an open blog provides, but without the privacy protection I get paranoid when too many people read this blog… or when one person rips through every post.

Anyway. If you’ve recently taken an extended stroll through my little blog, for whatever reason, you’re more than welcome to leave a comment anywhere you wish.

In other news… my son is having his baptism this weekend. Like the circumcision, this is something my girlfriend wants to have done, and I can’t think of a serious objection worth bringing up.

My brother, dumbwaiter, will be Victor’s godfather. My girlfriend’s older sister will be godmother. Without looking it up on Wikipedia, I have no idea what either title means. Some of my family is attending, some aren’t. I have no idea, really, what’s going on with the people who make up my family these days.

My uncle stopped me on the street a few days ago to tell me he and his wife wouldn’t be there. He didn’t really have an answer when I asked why. There is cake afterwards, so you’d think that’d be an enticement.

I’m fairly confident my grandmother won’t be there. Partially because she hates churches, and religion, but I think it’d be a little awkward being at the baptism of a baby she’d rather have been aborted.

Besides, her COPD has also been getting worse lately.

My girlfriend’s immediate family will be there. This will be the first time her parents, my parents, my brother, her sister and my grandfather will all be in the same room together.

It’ll be awkward, but it’ll be over in a couple of hours. It’ll be interesting, I’ll be wearing a suit for the first time since my brothers wedding last year. So this will be the first time my girlfriend, and her parents, will be seeing me all adult-like and shit. I’m even getting a haircut, and I’m shaving… not to the skin though, just to the stubble — I have no problem admitting I’m French.

…in case anyone’s keeping track, the anti-imperialist, Marxist cult of danger and doom I grew up in didn’t have time for baptisms. Which is why my younger brother wasn’t baptized until after we escaped. I managed to get my head wet because the Cult was still a twinkle in my father’s eye when I was born.

When my brother was ten, maybe nine, he found out I had been baptized, and he hadn’t. We were staying at my grandfather’s farm up in the mountains of Quebec… I think there was a lightning storm. My brother got concerned and threw a little fit… so our grandmother baptized him in the sink.

And it was legal… or whatever. It counted. My grandmother was a nurse back in the 1940’s and 50’s, and when a child was dying, she was allowed to do baptisms and, I think, last rites, if the Priest wasn’t around.

I’m not sure what Christ, or St. Peter, would say to someone standing before them who had been baptized, or given their last rites, by my grandmother… but I’m pretty sure it’d start with “What the fuck? uhm… dude, you are in exactly the wrong place.”

I’m not religious. To be honest, I’d prefer this wasn’t happening, but I don’t see any harm in going through with it… personally, I don’t like it when people who don’t believe get involved with religion. Like a snake charmer taking communion. Or taking an extra four wives just because you’re in Salt Lake City.

Oddly enough, however, I am my step-sister’s godfather…

...diagnosed with manic depression in 1989, for the next 14-years I lived without treatment or a recovery plan. I've been homeless, one time I graduated college, I've won awards for reporting on Internet privacy issues, and a weekly humour column. In 2002 I finally hit bottom and found help. I have an 8-year old son, and a 4-year old son... I’m usually about six feet tall, and I'm pretty sure I screwed up my book deal. I mostly blog at saltedlithium.com....
View all posts by Gabriel... →
This entry was posted in Bipolar, Bipolar Disease, Bipolar Disorder, crazy people with no pants, Health, Little Victor, Living With Depression, Living With Manic Depression, Manic Depression, Mental Health, Theology. Bookmark the permalink.

Stoner on a rollercoaster