Testimonials On Living With Manic Depression 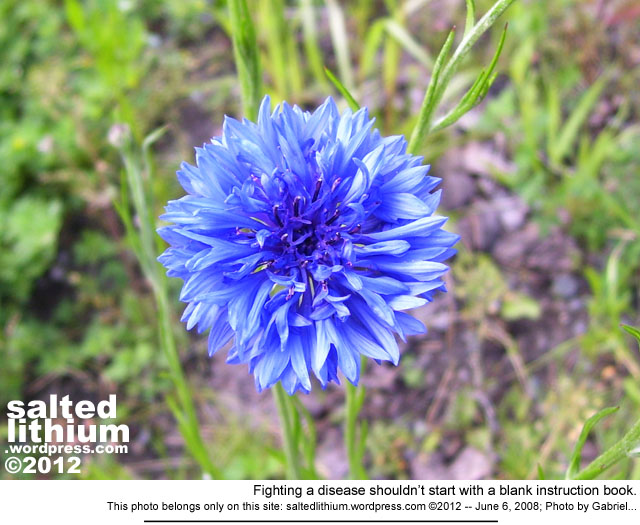 There shouldn’t be any surprises when dealing with a mental illness. We all share the same general symptoms, and the general behaviours are similar, so why should the recovery be any different?

Even the methods we use to recover come mostly from the same toolbox.

Most of us will go through years of alcohol abuse, self-harm, eating disorders, most of us will spend some time on a psychiatric ward, almost half of us will try to commit suicide at least once before we find a way to craft a recovery plan that works.

We will all have the same basic problems of misunderstanding and prejudice. Our families won’t know how to react to our behaviours, they won’t have a clue what help they can offer us. We’ll never find the right pamphlet that explains everything to them, or to ourselves.

Mostly, for a very, very long time we’ll remain totally ignorant of what this disease is doing to us, has done to us, and will continue doing to us until we can find a way to start recovering.

And it will take a very, very long time to start recovering. Because there are no road maps, because we’ve become so convinced that this disease makes us all unique, so what use would a memoir on recovering be to mine, if your bipolar is different from my bipolar?

Except your bipolar and my bipolar are actually remarkable alike. Manic depression can be overcome, it’s a feat that has been accomplished many, many times before.

The following excerpts were taken from people writing about their own personal recovery from manic depression, and other mental health issues.

The excerpts aren’t meant to stand alone, they’re meant to draw you to their original posts, and to their blogs.

An excellent way of taking back control over your life is to find people who have gone before you, and finding the similarities between their struggles and yours.

We can all learn from each other… there really shouldn’t be any surprises to living with a mental illness.

…this was originally published as a ‘page’ but it kind of got lost in the system, so I’m hoping it has a greater impact as a post. If anyone has a post, or blog, that has helped them in their recovery, I’ll gladly add it to the post.

Some Lessons People Have Learned So Far…

‘I Can’t Handle Life Anymore’; Feb. 15, 2008
“Life is hard. Life is full of pain. Heartache. Terror. Off the top of my head I can think of 5 things that terrify me in life that have nearly caused me to off myself in the past. My self loathing would be the biggest. I hated myself for a very long time. I can’t forgive myself for the events in my past, even those I had no control over. I couldn’t handle what I had become. Only a tenuous loyalty to those who loved me kept me here.”

‘I Owe It All To Something Beige’; Aug. 15, 2008
“I know I should have something deeper to say about nearly dying… for willingly trying to end my own life, destroy myself. That’s the problem. I don’t have anything deep. I didn’t emerge into the cloudy day thinking I’d start over, I’d be a better person. Frankly, the only thing on my mind was how fucking stupid I was, and how close I had been to seriously harming myself. I could have died. An hour later, two hours, maybe if I had fallen asleep instead of stared at a picture of my daughters, I would be dead, my ashes perhaps now floating into your eyes. All I could do was curse at myself and remind myself that I was a fool, and nearly a dead one.”

‘Hypomania’; June 8, 2008
“But my experience of life today has been mostly suicidal. Not the big, loud, exciting kind of suicidal, but the quiet this is all pointless and I want to die kind, with maybe a shade of hey, you have a rope here right now so why wait?. Not so much of that last bit as to make me feel that it’s a realistic possibility in the near future, but enough to make me wonder if cutting would make me feel better.”

‘Oratate v. Carbonate: Lithium Isn’t Created Equally’; May 16, 2008
“Many drugs need to be in the form of a salt to be stable. Lithium, the kind that actual doctors prescribe, is usually in the form of lithium carbonate. The lithium molecule is combined with a molecule of carbonic acid, to form lithium carbonate. It would be unwise to take pure lithium as adding lithium to water results in what chemists like to call a “brisk exothermic reaction”. To put it another way, you’d end up with no tongue.”

‘An Answer To The Non-Believer’; July 17, 2007
“A common belief is that an increase (manic) or decrease (depressed) in neurotransmitters is the main cause of bipolar episodes. But the situation is not nearly that simplistic. The cells themselves do not function properly under the influence of neurotransmitters. It is important to grasp this distinction when considering the effectiveness of medication.”

‘If I Wasn’t Bipolar…’; Feb. 11, 2007
“I have been ill for as long as I remember, as long as I was a real person. And I can’t compare myself to how I was unmedicated and untreated. Because I was your classically insane person. Swinging from suicidal to a gibbering, delusional wreck in 0-5. Or 0-150, depending.
But that’s it. It’s just an illness that needs to be medicated, like any other illness. So we have to deal, really.”

‘Mood Changes Are Normal’; Mar. 3, 2007
“I was very hyper, running riot and enjoying myself. Then, and very suddenly, I felt absolutely suicidal. Something tore through me and split me wide open. I could barely register anything, I was so caught off guard by the deep sorrow and depression that had infected me. All the lights were wrapped in grey and every thing felt threatening.”

‘Ten Bipolar Myths, Part One’; Nov. 14, 2008
“There are many myths about people with manic depression. Lots of times when we’re first diagnosed, or even down the road sometimes, we have these mythical ideas about what bipolar disorder is and can do. By accepting these myths, we buy into the stigma that often surrounds mental illness. By recognizing and challenging them, we can have better lives.”

‘Some folks just don’t get it’; Nov. 9, 2008
“Imagine me sitting across the living room from my mother. I’m explaining that because of my bipolar cycling and related things, to take care of myself well, I have to change my work dramatically. Yes, I can do art. No, I can’t do it when I have to run the business end by myself. She was almost desperate to tell me that I was mistaken, that bipolar disorder doesn’t affect my ability to handle things on a day to day basis.”

‘Eating Disorder Bullshit-O-Meter’; April 13, 2009
“The most amusing thing about ED’s [Eating Disorders] is how they give you the ability to be able to think one thing, feel it, believe it, but at the exactly the same time be utterly convinced of the polar opposite. The more I slip, the more I find myself calling my own lies, and the Bullshit-O-Meter comes out in force.”

‘kicking at the darkness until it bleeds daylight’; Nov. 8, 2006
“Depression is a thin coating, it’s a thin sheet of reflective ice concealing an ocean. It corrupts our ability to Reason, and without that ability we can’t defend ourselves against the thoughts inside our heads, so we find excuses we can live with. People with our disease are excellent at rationalizing unreasonable behaviour to fit situations we can’t understand.”

‘The Only Thing I Gave Up…’; Jan. 31, 2008
“When you think about the disease, when you think you are what the disease tells you who You are, You’re not what it says you are at all. Christ, the disease is really just a tiny piece of something in your brain… little microscopic drips of chemicals that are just a little bit out of place or about four out of a trillion neurons sparking once instead of twice.”

...diagnosed with manic depression when I was nineteen, for the next 14-years I lived without treatment or a recovery plan. I've been homeless, one time I graduated college, I've won awards for reporting on Internet privacy issues, and a weekly humour column. In 2002 I finally hit bottom and found help. It's now 2022, and I have an 8-year old son, and a 12-year old son... I’m usually about six feet tall, and I'm pretty sure I screwed up my book deal. I mostly blog at saltedlithium.com....
View all posts by Gabriel... →
This entry was posted in Bipolar, Bipolar Disease, Bipolar Disorder, crazy people with no pants, Health, Living With Depression, Living With Manic Depression, Manic Depression, Mental Health. Bookmark the permalink.

6 Responses to Testimonials On Living With Manic Depression