Summertime so avoid going toxic and get your Lithium levels checked 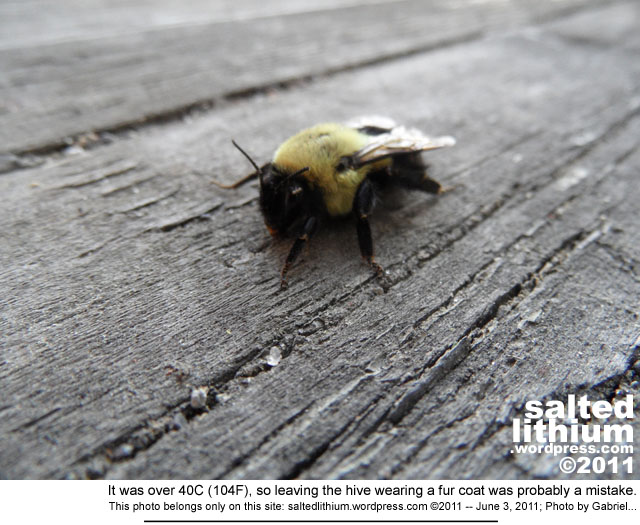 Summer’s here, so if you’re taking Lithium as part of your recovery from manic depression it’s vital you get a blood test.

Because it’s possible for the Lithium levels in our blood to fluctuate, blood tests are always important when Lithium is part of our recovery regimen. In order to be effective Lithium must be at a specific concentration in our blood.

Too little and we might as well be eating Pop Rocks. Too much, and there’s a risk of toxicity, which at this time of year means heat exhaustion, heat stroke, and eventually a stay in the hospital.

But mostly it makes us irritable and a pain in the ass to be around.

Since dehydration is the largest factor in the fluctuations, heat and especially outdoor activities can seriously screw up the levels. Just a few hours under direct sunlight, at the wrong levels, can make it hard to think, hard to reason and turns the Lithium into something that works against you.

So it’s important to get the test done, then talk to your doctor about adjusting your dose — which generally means lowering it, sometimes for a few months, sometimes just during heat waves.

Getting tested regularly gives your doctor a better understanding of how your body is reacting to the Lithium, but even if you (kind of like me) only get them done occasionally, getting tested seasonally is vital.

End of Public Service Announcement… but it is important we take as much control over our recovery as we can handle, and getting at least a seasonal blood test is in that category.

…we’re on our second 30C+ heat wave here, and I’m definitely a candidate for lowering my dose.

I’m still not sure if it’ll work or not, but I just installed an air conditioner which could be as old as I am. Free is as much as I can afford these days, so at worst I just acquired a new coffee table.

I mostly bought it so my son’s little brain won’t bake when he stays with me. I had it going for two hours earlier, and I think I noticed the temperature drop a little, so there’s hope.

...diagnosed with manic depression in 1989, for the next 14-years I lived without treatment or a recovery plan. I've been homeless, one time I graduated college, I've won awards for reporting on Internet privacy issues, and a weekly humour column. In 2002 I finally hit bottom and found help. I have an 8-year old son, and a 4-year old son... I’m usually about six feet tall, and I'm pretty sure I screwed up my book deal. I mostly blog at saltedlithium.com....
View all posts by Gabriel... →
This entry was posted in Bipolar, Bipolar Disease, Bipolar Disorder, crazy people with no pants, Health, Lithium, Living With Depression, Living With Manic Depression, Manic Depression, Mental Health. Bookmark the permalink.