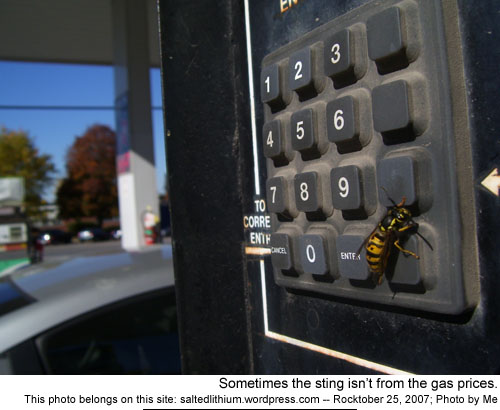 The gardener plants an evergreen
Whilst trampling on a flower.
I chase the wind of a prism ship
To taste the sweet and sour.
The pattern juggler lifts his hand;
The orchestra begin.
As slowly turns the grinding wheel
In the court of the crimson king.
“The Court Of The Crimson King [excerpt]”; King Crimson (1969)

I don’t normally save responses I make on other blogs, other than the “My Comments” section in the WordPress dashboard I rarely track them at all. But something I’ve been doing for awhile is after writing a long response I’ll copy what I’ve written before I post it… so if it gets buggered somewhere as the page is reloading I’ve still got a copy.

Yesterday I made a response on a blog I’ve fallen across a few times over the past year… I’ve never commented on it before, or even really wanted to comment on it before. But they were asking a question about something I had just spoken to my doctor about and my brain was still a little raw.

So I’m dropping it here because it… well, it sums up pretty neatly what I’ve been going through over the past few months as my recovery shifts away from the manic depression and into the clinical depressions. Their question was “Where do you go when you’re lonely?” And this was my answer* (I added paragraph breaks)… feel free to leave your own.

I’m actually trying to find… or trying to start finding a place where I’m not lonely. Eighteen years of untreated manic depression left me, in the end, pretty freaking alone. But now that the bipolar is under some control it’s the clinical depressions causing the alienation and loneliness. It’s a weird thing… it’s something I’m just starting to work out myself, but the manic depression actually feels or seems in retrospect as though it was much easier in comparison to deal with. Maybe it has to do with the bipolar depressions being fake, something forced on us by random chemical hotshots. But the clinical ones… those are the real ones. They have Reasons and Causes we can point to… and once that bipolar shit is carefully taken care of all those clinical depressions just rise like a slow moving tsunami — it’s not a wave, it’s you walking on the beach and realizing your chin is wet. It’s like when an animal is badly hurt they’ll hide under something until you reach under and drag them out and fix them.

That’s where I feel like I’ve been for the past eight months, under the porch licking the wounds. So, between the manic depression making me too toxic to be around, and now the clinical depressions keeping me under a porch (figuratively) the loneliness has been fairly extreme. What contact I’ve managed to keep is through my blog which, ironically, I started as a way to overcome my manic depression… it’s not really that ironic. But what I started doing to survive the bipolar is now the thing helping me to confront my clinical depressions by keeping me in touch with something somewhat vaguely human.

Sometimes, when I get feedback worth reading and considering, I actually feel a connection… I actually feel as though Other People have been where I have been and made it through to the other side and it really feels… it feels. It creates a feeling. It stops me, for a little while, from feeling what I had been feeling to that point. There are certain things you’re supposed to feel as you work through the clinical and major depressions which you don’t feel as you work through the manic depressions. Because the MD’s have no real cause there’s no recovery period, except the exhaustion from days of unending depression or mania. There’s nothing rational in the recovery. There’s no growth and no understanding. There are no lines you can follow where this caused this and then this and then this and these are the reasons for my depression.

But a clinical depression is all about threads… I can’t commit to the woman I love because my mother was overbearing because she was abused by my father and he was assaulted by his grandfather so these are the reasons for why I’m sitting here alone watching Gladiator and crying when Russell Crowe rides into his village to find his child dead.

The place I don’t feel alone, for the past eleven months, is sitting in this chair and staring into this screen and reading what notes and letters people… people I consider friends, leave on my blog. But there’s only so much they can write, and there’s only so much human / kind of human contact I can take before I have to take a break. A lot of the time GTA: San Andreas is a pretty decent substitute for loneliness.

*After I posted the comment I realized they had their moderation feature on, so I have no idea if they’ll ever post it as it was a little off-topic. It was definitely unlike any of the responses they had already received. If they ever take it out of moderation I’ll provide a link.

...diagnosed with manic depression in 1989, for the next 14-years I lived without treatment or a recovery plan. I've been homeless, one time I graduated college, I've won awards for reporting on Internet privacy issues, and a weekly humour column. In 2002 I finally hit bottom and found help. It's now 2022, and I have an 8-year old son, and a 12-year old son... I’m usually about six feet tall, and I'm pretty sure I screwed up my book deal. I mostly blog at saltedlithium.com....
View all posts by Gabriel... →
This entry was posted in Bipolar, Bipolar Disease, Bipolar Disorder, Classic, Clinical Depression, crazy people with no pants, Depression, Health, Lithium, Living With Depression, Living With Manic Depression, Manic Depression, Mental Health, Psychiatry. Bookmark the permalink.

"Life past, present, thoughts about the future, and ever changing world."

Raising awareness for mental health disorders through a shared passion of video games, poetry and more.