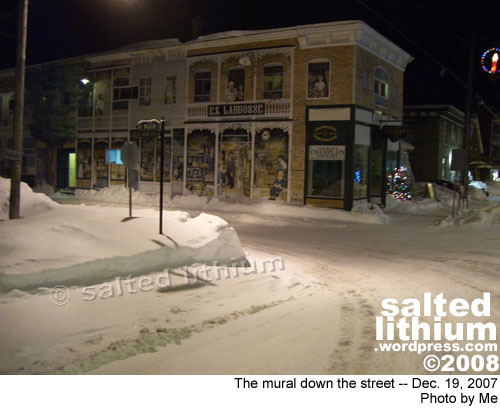 Have you ever had the odds stacked up so high, You need a strength most don’t possess? Or has it ever come down to do or die, You’ve got to rise above the rest? I’ve never had to knock on wood, But I know someone who has… Which makes me wonder if I could, It makes me wonder if…

I’m not a coward, I’ve just never been tested. I’d like to think that if I was I would pass… Look at the tested and think there but for the grace go. I’m afraid of what I might find out, I’ve never had to knock on wood But I know someone who has, Which makes me wonder if I could.
“The Impression That I Get”; The Mighty Mighty Bosstones

What the fuck is it with us? Even when we have a support network, even when we’ve spent time and energy actually developing a support network, why is it at the first sign of trouble we just dump the whole fucking thing and head for the nearest closet where we can wallow in our misery?

At least four people in my blogroll have either, over the past six weeks, dealt with Tragedy by shutting themselves away from the people directly around them or abandoning their blogs, or both. One of them, right now, has decided stopping his medication is the best way to deal with the death of someone close to them. Which is the dumbest fucking response anyone could ever make.

There’s a tendency to start thinking these blogs are primarily meant for Others to read rather than as places for Us to write about the stuff we need to work out… so when Shit happens we end up breaking off important connections as well as giving up an important outlet which we can use to work the Shit out. If writing is how you work stuff out then don’t forget to write about the stuff you need to work out. Somewhere.*

And if you post on a regular basis and it has become part of your regular routine then, yeah, you need to post and check stuff out online. Cutting yourself off from the people around you is not an answer. Cutting yourself off from something which has made you happy over the past months and even years makes no sense either. I’m not saying Interact with people who leave little messages, or even those who leave insightful responses, I’m suggesting — strongly — it’s the interaction of the blog Itself which is important.

You need to do the things you normally do, otherwise you begin to tell yourself you really don’t do anything. And in times of Grief we need people interacting with us in any way possible. We need a hand on our shoulder, but if it’s available sometimes we need an email in All Caps telling us to WAKE THE FUCK UP and get back into treatment so you can deal with this Shit from a position of strength… sometimes we just need a funny video from YouTube. But we’re not going to get those if we abandon the support network.

Besides… this is the new FaceSpace Blogger Social Paradigm people, we’re reaching across the planet looking for people and companionship we can’t find down the street because people like Us are hard to find… well This is it, This is who We are. You’re the alcoholic, depressed and occasionally suicidal neighbour I’ve chosen to get to know, and I’m yours, and you’re someone else’s and together we’re a support network for each other.

So do not, ever, hesitate to send an All Caps email and a funny YouTube to someone you think is in trouble. And don’t be afraid to look for them.

...diagnosed with manic depression when I was nineteen, for the next 14-years I lived without treatment or a recovery plan. I've been homeless, one time I graduated college, I've won awards for reporting on Internet privacy issues, and a weekly humour column. In 2002 I finally hit bottom and found help. It's now 2022, and I have an 8-year old son, and a 12-year old son... I’m usually about six feet tall, and I'm pretty sure I screwed up my book deal. I mostly blog at saltedlithium.com....
View all posts by Gabriel... →
This entry was posted in Bipolar, BiPolar Christmas, Bipolar Disease, Bipolar Disorder, Classic, Clinical Depression, crazy people with no pants, Depression And Christmas, Health, Intervention, Lithium, Living With Depression, Living With Manic Depression, Manic Depression, Punk, Salted Truths, YouTube. Bookmark the permalink.