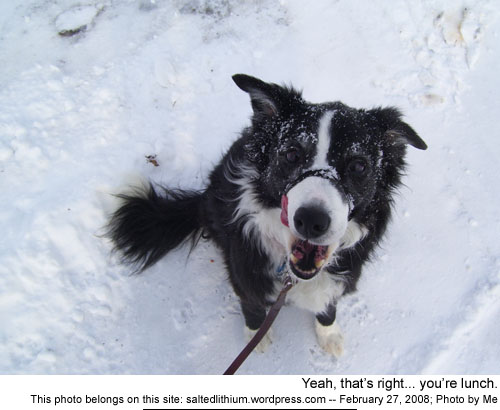 In 1989 I was diagnosed with manic depression based on symptoms which were about two years old. I went untreated for the next fourteen years. For most of that time I was unemployed, living in extreme (for Canada) poverty and the only thing which kept me from being lost into Homelessness was my ability to find a roof.

When it came to Recovering from a mental illness I was a complete ignorant. I knew the clichés, I believed in the artistic value of the disease, I believed the disease made me a deeper person. It didn’t.

Until just a few years ago the only way for people with Mental Illnesses / Diseases to learn about about Recovery was from a few authors, like Kay Jamison, who wrote about their research or personal experiences. But we only found their books if they sold enough to enter Pop Culture so we could hear about them on Public Radio and find them in a Chain bookstore… and lets face it, most of what was written was crap and only led to more misunderstanding and stigma.

But that was pre-User Friendly Internet. It is only with the tech advances of the past few years where the Internet has allowed researchers and technology to actually study the diseases, but just as important has been the software development and user-friendly interfaces which has made it possible to share first hand experiences with doctors and medications and symptoms between the people with the disease.

Before I started my Recovery 3.5 years ago I watched, and helped, several friends try to recover from addiction. What I found by watching them and listening to them was there’s one essential tool needed to recover from an addiction and it’s the same thing We need as we recover from Mental Illness. What we need is Touch.

The central responsibility is ours. We need to use our moments of lucidity to prepare ourselves for our recovery. But once we do that, once we make the first step towards understanding the disease and how to move past it, we need Someone to help us. That’s the central principle of groups like Alcoholics Anonymous and Narcotics Anonymous and any other Addiction Rehab Program. A human being standing beside you.

But when people with a mental illness such as manic depression enter recovery we are, and have been, left on our own to figure out the labyrinth of the various Mental Health Systems we’re thrown into… right as we’re beginning treatment, which will be without a doubt the toughest physical and mental challenge we’ll face.

Essentially we are left to face a disease and the underlying issues hidden by the disease on our own. There’s a doctor whom we see occasionally, but then who? Who is there to Touch us, to teach us, to at least be in the same room with us and listen… to whatever. Who do we call when we’re sliding?

This is what an “Addiction Sponsor” is and what they are meant to offer:

It’s exactly what we’re missing. Addiction Recovery programs have helpers, they also recognize the importance of Anniversary’s for someone who is Recovering. There are moments in our Recovery we should be proud of… like going a whole month without wanting to kill ourselves. How’s that for something to acknowledge? A good friend of mine, a long time ago, asked me to stand beside him when he received his one-year Chip from AA. In a room full of people, including his parents, he was recognized as having done something wonderful and worthwhile and difficult. That moment was all about motivation… not just to get to that point, but as a tool he could use later on to say “I may be feeling like a drunk now, but here’s this Chip in my hand which says I’ve survived and succeeded”.

So how can we have the same feeling of accomplishment, and the same support? I’m not sure, in the Real World, we can.

I live in a region of Canada which is pretty much the same size as Britain, but with the population of a medium sized airplane. In the Little City roughly ten miles down the highway from here there are AA and Narcotics Anonymous meetings in French and English which are both well attended, there is also at least one Addiction Recovery House.

According to a Canadian Mental Health Association website, last updated in 2006, there’s a weekly two-hour “Peer Support” meeting for people with mental illness, and that’s all… and it’s a $40 cab ride from here and back. Keeping in mind only 20% of the Canadian population will have a severe depressive moment in their life, and 2% of that group will be manic depressive, the likelihood of finding someone to be a Mentor in a “local” meeting becomes almost nil.

Blogs were created in the pre-HTML Internet Era, but that was three guys at DARPA. The current form of Blogging is only a few years old. It’s a new form of communication. How this works, how this exchange of personal information, how writing about how a medication effects me and how my Recovery can help your Recovery, is all brand freaking new. Nowhere, at anytime, have this many people with manic depression or any other Mental Illness been able to gather in the same place and say “this Treatment helped in my Recovery, maybe this could work for you.”

The feedback I’ve received through Salted has helped me to understand what Manic Depression is and how it can be controlled. I’ve also learned a lot about Recovery from blogs maintained by people Recovering from addiction and other forms of mental illness, and even other diseases such as AIDS.

I’m not entirely sure how it could be put together but because there’s an opportunity given by this User Friendly Internet Era to allow people with manic depression to connect to each other and learn from each other, I think we can at least collect information about what has worked for those of us in Recovery.

How useful are Offline support groups; what medications we use, and what side effects, benefits and harm have we experienced; how easy is it to find a doctor where we live, what financial support is there; what books or magazines should we be reading, or movies we should be watching; information about studies done on mental illness…

Most of this information is already out there (in here) of course, but mostly in clinical form from Associations and Institutes, or in instant message-style Members Only Forums and chatrooms where the best help you can expect comes in the form of emoticons and {{parenthesis hugs}}.

A site like PeoplesMD, where information on research into mental health issues can be accessed and stored, is only part of what I believe is necessary or possible. We don’t just need information, like a Press Release telling us we need to be in the sun more often. We need someone we know and trust to contact us when we’ve been rundown by a lack of sunlight… someone to remind us it’s okay to be depressed and there are methods of beating back non-bipolar depressions, to let us know maybe what we’re feeling at any given moment doesn’t have to be attributed to the disease.

Basically we need someone to say “I know you really want a drink, but if you take it you’re likely to be right back on the path to an early death… but you’ll definitely feel like you’ve been defeated.”

People just starting their Recovery need to know there will be hard times no matter what treatment they decide on, and people three years into their recovery need to be reminded that people get depressed when there’s no sun… we will experience natural depressions and not have “I’m depressed because I’m bipolar” to fall back on, which is a very difficult step in our Recovery.

There would be large obstacles to something like this, other than starting it, like the possibility someone being held as an emotional hostage… the Addict / Sponsor relationship is a complicated one. I’ve seen some pretty damaging abuse performed in some of those relationships.

But for now I’m more interested in how something like this could work, or even if it could work… there is a website for addicts which comes very close to what I’m thinking of, it’s called “Sponsor Search” and it’s a database to connect addicts in any given region to potential sponsors and meetings.

Right now I think the biggest problem I’ll have is getting this explanation down to a few decent sized paragraphs… so if anyone has any ideas about any of this, or a suggestion on how to reduce this post to only a few paragraphs, please leave as long a comment as you’d like or post a response somewhere else…

...diagnosed with manic depression when I was nineteen, for the next 14-years I lived without treatment or a recovery plan. I've been homeless, one time I graduated college, I've won awards for reporting on Internet privacy issues, and a weekly humour column. In 2002 I finally hit bottom and found help. It's now 2022, and I have an 8-year old son, and a 12-year old son... I’m usually about six feet tall, and I'm pretty sure I screwed up my book deal. I mostly blog at saltedlithium.com....
View all posts by Gabriel... →
This entry was posted in Bipolar, Bipolar Disease, Bipolar Disorder, Canada, Classic, Clinical Depression, crazy people with no pants, Depression, Health, Intervention, Lithium, Living With Depression, Living With Manic Depression, Manic Depression, Publishing, Salted Truths. Bookmark the permalink.