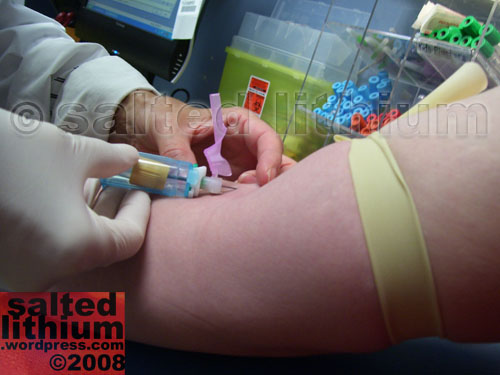 I’ve been getting lost in conversations with myself. A lot. I’ve spent more time outside over the past ten days than I did all winter and I’m finding myself moving my hands, arms and even mouth all in reaction to my inner dialogue. I’m not speaking out loud, but I think I have been laughing quietly. I can be a funny guy.

This afternoon I had plans to take a shower, so I strip down and turn the water on but before I get in I think “music, I should turn on the stereo”. On my way to the stereo I start up a conversation with myself, and the next thing I know my pants are on and I’m pulling on a shirt with the intention of walking to the store.

I started talking to myself (not out loud) back in college. It was an intentional thing, I wanted to see how it made sense for some people to be talking to themselves… I had seen a guy gesticulating with his arms and his face was really animated, but he seemed to be having a really good time. When I first started doing it I’d make an effort to move my hands like I normally would in a conversation.

When I moved back here and basically isolated myself the conversations definitely went deeper. And they also became targeted. It wasn’t just me talking to me, it was me having conversations with my sister while I was playing EA Sports NHL2002. It made the time pass less noticeably while I was scoring fifteen goals against the NY Rangers.

I actually kept notes and turned my inner conversation into a 36,000 word letter to her. It looked like a manuscript. She liked it, but it was definitely one of the more insane things I’ve done… recently.

I was walking today… I had just finished working with my step-father on his ongoing Museum renovation project. I was definitely heat exhausted, I wasn’t expecting to be outside for so long so I had no hat on (people on Lithium should Not be outside for more than a few hours on a sunny day). So on the way home I got into a deep discussion with… Someone and actually came right up to the brink, I was just about to start talking Out Loud when something like a survival instinct kicked in and I realized I was in public and I had been moving my mouth, eyes and hands like there was someone right beside me and we were talking about hockey.

I was actually laughing and about to respond in my outside voice.

Other than my sister I’m never really sure who I’m speaking with. Sometimes there’s a definite Someone, but most of the time it’s one-sided… there’s no real response, just me reacting as if there had been a response.

Or maybe I’m practising… interesting. I’ve had this talk with my doctor before, about how most of my interactions with people never seem real. They’re real in that they happen, but my end if the interaction always seems forced or something I prepare for before I have the conversation.

I just did it by the way. I stopped to do some HTML stuff and started a conversation with a friend of mine. It’s not the ‘having’ part I have a problem with, it’s how deep they’re going, how real they’re getting. Just now I wasn’t copying and pasting HTML, physically I was, but mentally I was having a discussion with someone who isn’t here. 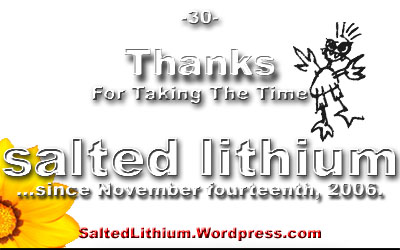 ...diagnosed with manic depression when I was nineteen, for the next 14-years I lived without treatment or a recovery plan. I've been homeless, one time I graduated college, I've won awards for reporting on Internet privacy issues, and a weekly humour column. In 2002 I finally hit bottom and found help. It's now 2022, and I have an 8-year old son, and a 12-year old son... I’m usually about six feet tall, and I'm pretty sure I screwed up my book deal. I mostly blog at saltedlithium.com....
View all posts by Gabriel... →
This entry was posted in Bipolar, Bipolar Disease, Bipolar Disorder, Clinical Depression, crazy people with no pants, Depression, Health, Lithium, Living With Depression, Living With Manic Depression, Manic Depression. Bookmark the permalink.