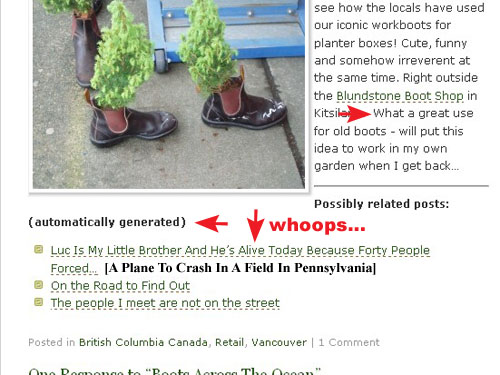 WordPress recently released a feature called “Possibly Related Links”, which automatically generates links that appear at the end of each WP post. The links are random and are determined by the tags and/or categories you’ve chosen.

However, not all of these links are appropriate and the only way to prevent WordPress from putting these links on your post is to remove the feature altogether, or “opt out”. But many WP bloggers don’t know the links are optional let also how to get rid of them because the only announcement came on the WordPress.com splash page under the headline of “Possibly an Announcement”.

And now even those of us who opted out straight away are finding our links on other blogs. On April 29, for example, someone published a cute post on shopping for gardening attire. One of the “random links” was to a poem, another to someone writing about their time on the ocean.

The third link, however, was to a post I had written September 12, 2007, about how my brother survived the 911 attack, and how our mother spent that day waiting to find out if her youngest son were dead or alive.

The only connection between the original post: “Cute, funny and somehow irreverent at the same time. Right outside the Blundstone Boot Shop in Kitsilano.”

And mine: “When the third plane hit the Pentagon my mother was standing up, screaming at the television, screaming for my little brother to get the fuck out of there.” Is the category “Canada”. A link generator searching for common posts and finding a connection that vague seems inept.

I opted out of the system from the beginning (and since being made aware she could also do so, so has the blogger with my link on her site). I chose not to participate for several reasons. For one, I believed the feature would bring trolls to their victims, and I found an example on “The Frame Problem” of someone writing against the Cult of Sci3ntology then having a direct link to Sci3ntology’s WordPress site placed on his post.

Then there was the complete lack of control. We were told the only control the blogger has over the feature was to opt out.

But most bloggers didn’t even know they had opted into the feature. Nine bloggers, for example, left comments on my blog yesterday saying they had no idea where this feature came from, or how to get rid of it. Dozens more ended up in the WP Forum asking the same questions.

Creating an automated link network may seem innocent, but the problem starts with the link on your page and readers thinking you endorse the link. The problem ends with your link on Sci3ntology’s page and your blog being noticed by them.

Again, the only solution offered is the same thing I’ve told people commenting on my site: if you don’t like it, opt out.

Well, I opted out. I chose to “Hide related links on this blog” and now the story of my little brother surviving 9/11 is spam on someone else’s travel blog, because as long as people don’t understand where these links are coming from or that they have a choice to turn them off, or that the choice is fairly given to them, the feature is spam.

Since the release of the link feature WordPress and Sphere, the company who created the feature, have left messages in the Forum saying, basically, it’s a work in progress. And, according to WordPress, there are now also plans to introduce a “Tips” feature to our Dashboard as a way of improving communications.

But this kind of communications failure isn’t unique to WordPress. It’s a common problem among most, if not all, New Media companies. It’s actually a legacy problem from one of the worst characteristics of Old Media companies.

Companies whose primary service is to offer people an opportunity to create content, like Blogger or WordPress or TypePad/Vox, often treat the people who create the content they sell ads on as if we were immediately replaceable, or an afterthought to the company.

Facebook’s recent plans for tracking users, YouTube’s ability to erase content without warning, Google creating and refusing to fix the splogger and blog scraper problem, and this situation with WordPress are all examples of how badly communications between Users/Content Creators and the people building the framework have been since the beginning.

WordPress only creates the infrastructure for our content, it makes the paper and the ink, we supply the ideas and the soul, which makes us bloggers the main part of the process. Which makes it important for WordPress, and the others, to communicate changes to us.

But currently these company’s are stuck in the “love it or leave it” mentality. There’s always another platform, they’ll warn, for your content. If you don’t like our newspaper, there are twelve other ones right there for your letters to the editor. Newspapers used to believe their readers were not part of the process. Reader feedback was ignored. But now with declining readership, newspapers and magazines are making the same ‘mea culpa’ New Media will eventually have to make.

Blogging companies are different from Brick & Mortar ones in that their product is created by their audience. So not only must the company’s have an outwardly focused communications strategy to investors, they must have an inwards-based one as well. So far they’ve all failed miserably.

For these companies to take us for granted is always a dangerous thing. When asked why he doesn’t charge people to use his website, for example, the founder of Craig’s List once said “because the next day everyone would create their own Steve or Mary List…”. He didn’t mean it as a threat, just a fact of New Media.

In the online economy we, the bloggers, provide most of the content free of charge, or we’re charged a fee to create it… videos, photos and text. The absolute very least the people we provide this service to owe us is a better communications strategy which actually makes our jobs easier, and makes us want to keep providing the content.

…and this is the last time I’m writing about WordPress on this site. I’m a reporter, but this is not a reporting blog. It’s my recovery blog. Bottom line, my post was not supposed to be chosen by this “random generator” and seeing it there was like being punched in the chest. The people behind WordPress are smart enough to be doing better.

...diagnosed with manic depression in 1989, for the next 14-years I lived without treatment or a recovery plan. I've been homeless, one time I graduated college, I've won awards for reporting on Internet privacy issues, and a weekly humour column. In 2002 I finally hit bottom and found help. I have an 8-year old son, and a 4-year old son... I’m usually about six feet tall, and I'm pretty sure I screwed up my book deal. I mostly blog at saltedlithium.com....
View all posts by Gabriel... →
This entry was posted in Clinical Depression, crazy people with no pants, Health, Politics, Punk, Technology, WordPress. Bookmark the permalink.