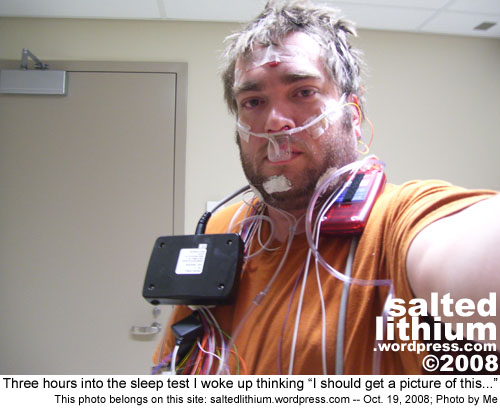 I’m not sure what it is they study in a sleep clinic but I’m pretty sure it has almost nothing to do with sleep.

I don’t know why it never occurred to me earlier but a few months ago I asked my psychiatrist to refer me to a sleep clinic. We had talked about it before, but from memory I always just waved my hand and said something like “I’ll bring it up with my family doctor.” Which I may have done, I have an annoying habit of forgetting everything my family doctor has told me once I get home.

My psychiatrist and I were working on the assumption there would be a space available in January. But thanks to a massive expansion project at the Montfort Hospital in Ottawa a new sleep clinic opened up a few weeks ago. So my psychiatrist put my name into their hat and I got the call on Thursday.

And on Saturday night a young technician was plastering electrodes to my head, face, neck and legs. To make sure the wires stayed stuck to my head they actually used the same material doctors use to make casts for a broken limb… I guess there’s some symmetry in there.

There are still parts of the hospital around the clinic under construction. Everything was brand new. Except the beds. Mine was a double cot. When I lay down so the technician could plug the wires into the wall I immediately noticed the bed was just a bit slanted, so my head was just a touch lower than my hips. But at the time I was too preoccupied with listening to the technicians instructions. Plus, the first thing I really noticed was tilt added a little stretch to my back that actually felt kind of nice.

But once the lights went off and I turned onto my side it didn’t feel so nice anymore. It felt like a steel bar in my kidney.

I had a thick velcro belt around my gut and one around my chest to hold the wires from my legs. I had tubes around my nose and mouth so they could monitor my breathing, the plaster was pulling on my hair and there was an oxygen monitor taped to my hand.

The wires taped to my legs were just short enough to prevent me from stretching my legs, so I had to sleep with my legs bent. And all of those wires were just long enough so I could raise my head about a foot off the pillow, and prevented me from sleeping on my right side.

When I wanted to get out of bed, for water or to use the washroom, the technician had to come in and spend a few minutes unplugging me.

Officially the clinic was looking into my sleep disturbances related to the probability I have sleep apnea. But that night at the clinic was the worst sleep I’ve had since before I started my recovery. I never felt like I got into a deep sleep.

The dreams I had were the kind where you’re so sure you’re awake you actually wake up to find yourself reaching for something which was never there. Toss in the four times I really did wake up to get some water, and I’m not sure what they studied.

…I can actually remember when my sleeping patterns got out of control.

Even when I was a kid I had always been comfortable staying up at night. When I was seven I had the bed next to the window and I’d stay up listening to the city, or watching the sky. I’d also sit at the top of the stairs and listen to the arguments about politics and religion between members of the collective I grew up in.

When I was a kid I’d stay up with a flashlight so I could read a Zane Grey novel, then when I was thirteen or fourteen I started staying up really late on Friday nights to watch a program called “Friday Night Videos”. Part of it was the music but mostly I was trying to catch a glimpse of 1980’s video chicks with their huge hair, bright makeup and tight leotards.

It came on around midnight and ran for ninety minutes. At first mom would tell me I could watch the first half-hour, later on she gave up giving me a time limit and would just yell down from her bedroom for me to turn it down. Which I would, then I’d drag the chair right up to the TV and watch David Bowie. Then, around 2:30am, mom would come downstairs and wake me up so I could get to bed.

But my reactions were always within a normal framework. When I was seventeen at camp, and I was up all night with someone, I was tired the next day. When I was fourteen and stayed up until 3am watching the PBS pledge drive movie marathon, I was forcing myself to stay awake so I could see “The Good, The Bad and The Ugly”. Without the movie’s or the Duran Duran videos I was awake in the mornings and in bed at night.

It was when I was eighteen, when I was working as a hunting and fishing guide in Northern Ontario, when how I slept left that framework.

When I was eighteen I moved, for various reasons, 2,000km away from home. I found work at a camp on the Woman River chain of lakes. The nearest town was 60km away by mining road. The nearest hospital was another 100km. The river itself links together about a hundred lakes. I lived up there for about seven months.

It was a pretty intense place. The next youngest guide was thirty-six, and of the thirteen guides only four of us had never done time in a prison. I’ll write about it later, but it was basically seven months of drinking, drugs and fish.

There had been a weird weather week in early September. Very dark, very windy and very cold. And then one morning I just didn’t get up. I was on the top bunk in one of the bedrooms in the guide shack, and I can remember one of the other guides pushing my shoulders and telling me it was 5am. By then I should have had my boat ready, ate my breakfast and getting my clients ready.

Then a few guides ended up in the room I shared with three others, and they were trying to figure out what was wrong with me, and whether anyone was going out on the river that morning. And one of them said, very seriously, “I think he’s got the sleeping sickness”.

...diagnosed with manic depression in 1989, for the next 14-years I lived without treatment or a recovery plan. I've been homeless, one time I graduated college, I've won awards for reporting on Internet privacy issues, and a weekly humour column. In 2002 I finally hit bottom and found help. I have an 8-year old son, and a 4-year old son... I’m usually about six feet tall, and I'm pretty sure I screwed up my book deal. I mostly blog at saltedlithium.com....
View all posts by Gabriel... →
This entry was posted in Bipolar Disease, Bipolar Disorder, crazy people with no pants, Health, Living With Manic Depression, Manic Depression, Sleep. Bookmark the permalink.

15 Responses to Wired For Sleep