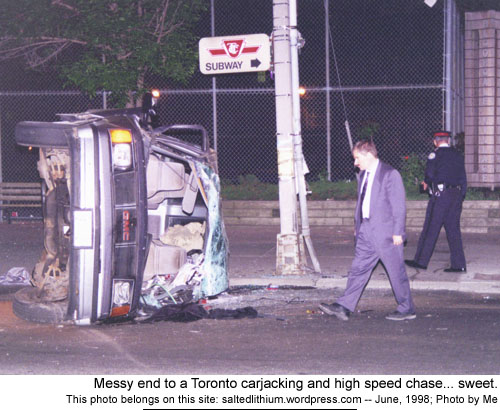 Ten years ago I didn’t so much move to Toronto as fall out of Ottawa. Moving to Toronto wasn’t even on my to-do list two months before I moved there.

I’m pretty sure I can even remember telling several people a move to Toronto — Canada’s largest city… and the fifth largest city in North America — would be the last thing I’d ever do. But being out of work for five months will do strange thing to a persons mind.

I only lived in Toronto for a few years… I think it was three. But, Jesus. H. Christ.

I’ve only been back once, and that was two years ago… and, technically, I was only in Toronto for a few hours. I spent the next week locked away in my brother’s basement apartment in a suburb of Toronto which, technically, could also double as a suburb of Ottawa.

That visit was funny. My brother and his girlfriend both hate being anywhere close to downtown Toronto. One night they tell me we’re going out somewhere, so — thinking we’d at least be going to a downtown-type bar, I spiked my hair and got all punked out, then their friend came over and we ended up sitting in the living room before, I think, going to a stripmall bar.

Their friend was hot though… but I was also pretty early into my recovery, so my people skills were nonexistent. Plus, my hair was really spiked. So…

Since I left Toronto it has always been my plan to move back. Actually, when I moved back to my home village to get myself recovered from manic depression, the original plan was to move back to the city six months later. You know, when I was cured.

At the time I also figured I’d have the book written and published within that six month period as well. Looking back, of course, I was an idiot — but well intentioned and not one of the dangerous ones.

This time I’m going to Toronto to be with my brother while he comes to terms with getting married on the seventh. I figure my little brother’s going to need some support before the week’s over.

I’m not really sure where his head’s at with the wedding, he stopped communicating with the rest of the family about a year ago… no, wait, that was actually twelve years ago.

The email he sent last night was the first I’ve received in a few months. So I figure there are three likely scenarios… everything’s fine, or; he’s been drunk and crying for five months, or; all of the above.

I’m also going to be meeting three Toronto-based bloggers, two I’ve known for almost two years, and the third is someone I went to College with… yes, The Bitter Guy and I have known each other since we were both Bitter Lads.

When I first moved to Toronto it was for a job. I only had two weeks from when I was told I had the job until my first day to unload whatever crap I had accumulated in Ottawa, pack whatever crap I was taking, take a five-hour bus ride to Toronto, find someone willing to sell me some weed, find a place to live, unpack, and find the office.

So, thank God, my good friend Justin and his lovely wife (shout out) gave me a bed to sleep in while I worked my way through my list. I think I stayed with Justin for a week… maybe a bit longer. But eventually I found a furnished place on the second storey of a downtown rooming house.

When I made the move I brought a sports bag filled with clothes, a satchel for my notebooks and my two camera bags. After living in Ottawa for eight years that was pretty much all I had, other than a box of books and a few dozen cassettes of music — which I left with my little brother, and which he later sold for cigarette money. Tool.

So the first day I moved into my room I walked to the WalMart, bought camping supplies — a sleeping bag, hard-plastic cutlery and dishes, and a sauce pan — and considered myself done.

I spent my first night in my new city walking. I was living on the corner of Dufferin and College streets, so I had a general idea of where “downtown” and “Chinatown” were. My goal was to find a Chinese restaurant with a menu in the window so I could find “General Tao’s Chicken”.

“Chinatown” in Ottawa is basically the street corner of Bronson Avenue and Somerset Street West. “Chinatown” in Toronto is actually a Chinese town. You can walk for eight city blocks and never hear a word of English. I loved it. Kind of… I’m not a fan of immigrant ghettos, but they work.

You could also walk for eight city blocks and never find an English language newspaper. Which wasn’t so great if you wanted to read something while you were eating your General Tao’s Chicken.

By the second year I had actually moved into a house just a half-block off the street which bisects “Chinatown”. My apartment on Spadina and Phoebe Streets was also a half-block behind the legendary Horseshoe Tavern.

Which was just freaking awesome.

About three weeks after moving to Toronto, I was at an intersection waiting for the light to change when I heard two guys yelling my name. It was a couple of dudes, a few years younger than myself, who had gone to my high school. I knew one from when I worked as a bartender, I had gotten him a job as a disc jockey at the club.

The other guy I only kind of knew, but I did recognize him. Turned out he was tending bar at an off-campus pub near the corner of Spadina and College. It also turned out, within a few blocks of my new apartment, there were a half-dozen refugees from my home village. And his bar was the meeting place for all of them, plus another dozen or more.

I was drunk for the next two years. It was awesome.

Both guys, plus another two from our hometown, were in a punk band… and there I was with two cameras and stuck in an office for most of the day.

Work itself was basically something I had to try not to ignore. But… it was fun. The first job, anyway. I hooked up with the cool kids almost straight away. For the first few months I tried to get my assigned stories done first, but after awhile I started finding stuff I was interested in writing about. And, mostly, they let me have my interests… so that was cool.

I tried to be there on time, but… well, there was the drinking thing, there was the inability to sleep thing plus the untreated manic depression thing. So work, at all three of the jobs I ended up with in Toronto, was never the priority.

My primary interest was taking photos. When I was in Ottawa I’d show up at protests just to take photos, or just get involved in some weird shit and take photos of whatever was going on.

When I moved to Toronto I tried to do the same thing (see photo above), but having a full time job got in the way. Plus Toronto doesn’t have decent protests, and is too large to just go out looking for random stuff.

So I became the unofficial official photographer for the Toronto Underground Punk Scene.

This is how fucking weird my life was in Toronto… I was leaving house parties and where I had met people making $250,000/year doing Y2K fixes (this was in 1999), or $500,000 working in public relations, and taking the bus to house parties where most of the people were on social assistance.

For my job at the magazine I was being invited to parties in the most upscale venues in Canada, and when I left I would take a bus home to my rooming house, hoping my landlord had left the chemicals so I could kill some roaches.

It was just fucking amazing. Every single day it was something completely new. Plus, every Thursday night a group of reporters from most of the major Toronto-based publications would meet at a small bar downtown, including myself and a couple of other reporters from the magazine.

It was like at night I was living with the people I had lived with during the first five years I was in Ottawa — street punks, anarchists, wannabe’s, artists, stoners, freaks, dealers, alcoholics, addicts — plus I had the close friendships of people who knew me, or my backstory, because we came from the same town, plus I had the professional friendships from work.

I really, really, really want to move back. And, someday, I will. The problem, of course, is my life there doesn’t exist anymore. But at least I can still visit some of the scenes.

...diagnosed with manic depression in 1989, for the next 14-years I lived without treatment or a recovery plan. I've been homeless, one time I graduated college, I've won awards for reporting on Internet privacy issues, and a weekly humour column. In 2002 I finally hit bottom and found help. I have an 8-year old son, and a 4-year old son... I’m usually about six feet tall, and I'm pretty sure I screwed up my book deal. I mostly blog at saltedlithium.com....
View all posts by Gabriel... →
This entry was posted in Bipolar, Bipolar Disease, Bipolar Disorder, Clinical Depression, crazy people with no pants, General Tao's Chicken, Health, Living With Manic Depression, Manic Depression, Ottawa, Toronto. Bookmark the permalink.