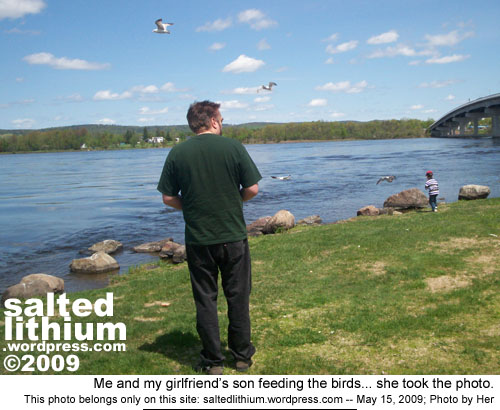 My girlfriend and I were in Ottawa at the high risk pregnancy unit of the Ottawa General Hospital today. The news we received was pretty grim.

The doctors do not believe her pregnancy will last to full term. The surgical procedure which gave our child the best shot at survival isn’t working properly.

It’s called a “cerclage”, and it’s essentially a surgical stitch in my girlfriend’s cervix. My girlfriend has what’s known as an “incompetent cervix”, which means without the “stitch” her cervix would most likely be open, which would then cause a miscarriage.

Two-thirds of the “stitch” has worn away. There’s less than a centimetre of it left and, because the baby is now two weeks larger than normal, there’s more pressure pushing down on her cervix.

The only solution the doctors have to offer right now is to have my girlfriend live in a stress free environment. So no more driving, no more shifts at the convenience store, no more walking further than the sidewalk, no more baths — short showers only, and no more loud noises.

She’ll be spending at least three nights in the hospital starting on Thursday, so they can monitor her, and to give her a stress free place to be.

Beyond that, we basically have to make it one more month for the baby to have a legitimate shot outside the womb.

My girlfriend is devastated. I am as well. We both thought the procedure would work. Neither of us were thinking of what could go wrong, we were both thinking about Sunday, January 10, 2010.

She’s also devastated because once again her family is doing their very best to make her life miserable.

When we arrived back in town I took her father aside and explained to him what was going on. Right away he agreed to take my girlfriend’s three-year old son to stay with his grandparents. An hour later we received a call from her mother, who told us there was “no way we’re taking him for more than two days” because this situation was “all your fault anyway, and now you have to live with the consequences” and, just for laughs, she added, “well I guess this means you shouldn’t have had any more children”.

This is what her family does, how they treat each other during an emergency or when they should be happy. Her mother is a cruel, evil, dried out bitch who has trained her children like fighting dogs — so now all she has to do is point, or say a few words, and she sets them on each other because it makes her feel tingly inside.

And now this fuck bitch is costing my kid his chance at living.

…my girlfriend will spend the weekend in the hospital. Her son will spend the weekend with his grandparents. Next week I’ll have to take over as primary babysitter. I’ll be taking him to school, bringing him home, making sure he gets fed and entertain him until bedtime. I’ll be shopping for my girlfriend, running her errands, and making sure her life is quiet and stress free.

...diagnosed with manic depression in 1989, for the next 14-years I lived without treatment or a recovery plan. I've been homeless, one time I graduated college, I've won awards for reporting on Internet privacy issues, and a weekly humour column. In 2002 I finally hit bottom and found help. I have an 8-year old son, and a 4-year old son... I’m usually about six feet tall, and I'm pretty sure I screwed up my book deal. I mostly blog at saltedlithium.com....
View all posts by Gabriel... →
This entry was posted in Bipolar, Bipolar Disease, Bipolar Disorder, Clinical Depression, crazy people with no pants, Health, Living With Depression, Living With Manic Depression, Manic Depression, Mental Health, Pregnancy. Bookmark the permalink.