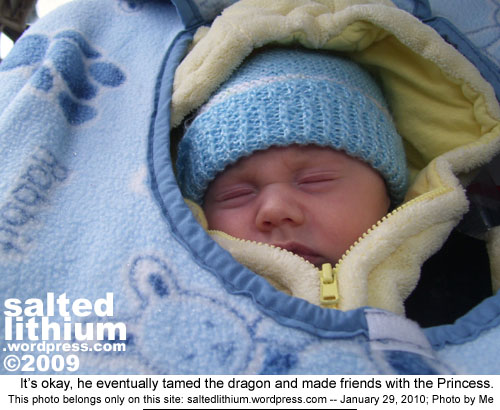 My girlfriend hasn’t been sleeping well this week, so Little Victor and I have spent a lot of time together this week. I think the schedule of a single mother with two children is getting to her.

For as long as I’ve known her — which is two weeks away from a year — she’s never had a decent nights sleep. Either her four-year old is waking her up at 3am, generally to get her to sleep in his bed, or her four-year old wakes her up complaining of a mystery illness. Then, after she got pregnant, there was all of that drama.

So… I think it’s catching up to her. Tonight, for example, her son came back from spending the weekend with his father. Normally she’d spend the first hour helping him re-acclimate to the newish environment. Tonight the first thing he did after walking in the door was ask to play his video game, and the first word out of her mouth was “no”. Everything just went to shit from there.

It turned into three hours of deep sobbing from him, and panic from her. So I got to keep Victor with me while they figured stuff out.

My girlfriend and I finally had a chance to see Avatar this week, which meant Victor spent the afternoon and early evening with my mom. My mom and I have a difficult (to describe) relationship, but Victor and my mom have the kind of relationship where, after a few hours, my mom looks fifteen years younger.

We were at a restaurant for brunch this morning and my mom held Victor the entire time. My mom noticed how tired my girlfriend has been, and offered an odd solution… basically, after Victor’s older brother goes to school, my girlfriend could crash at my mom’s place for a day while mom looked after Victor.

Of course it’s a ploy, my mom would adopt Victor tomorrow given the chance, but it’s an interesting idea.

Victor hung out with his great-grandfather — Big Victor — three times this week. Last week my grandfather was having a hard time finding my girlfriend’s apartment, this week he’s calling from his car to let us know we’ve got ten minutes to prepare. My girlfriend adores my grandfather, which helps. And my grandfather loves having someone new to tell the old stories.

I’m going to set up my camera the next time so I can get a movie of them together, and audio of my grandfather talking about dealing with the Montreal mob to get construction projects started back in the 1960’s.

My grandfather bought us (Little Victor and his parents) all lunch at a local restaurant on Tuesday. Waitresses love my kid.

Little Victor’s biggest day for meeting new people was on Saturday. There are six people in my family with birthdays at this time of year. We’re separated by about ten days. So mom had a special lunch for everyone. It was pretty sweet… lots of people, lots of alcohol, buckets of food.

It was the first time Little Victor met my younger brother and his wife — who’s four months pregnant, and a total bitch. My uncle held Little Victor for the first time, my grandmother finally got around to holding her great-grandson — I just aimed them at each other, once she had him she started telling everyone it was a bad idea to let seniors hold babies… because they’ll drop them. She’s just that funny.

Little Victor survived, but he has been touched by evil. So… we’ll see.

He also got over his cold by Monday. And he’s been keeping down his formula… which is a little bit too bad, because he was getting pretty awesome at the projectile vomiting thing. We didn’t get him weighed this week, but my girlfriend’s certain he’s over nine pounds now.

We didn’t watch many movies this week… we tried watching “ZombieLand” on Saturday night, but I fell to sleep halfway through. I’m not sure if Victor managed to finish it. I liked it right up until the Bill Murray gag. That was just stupid dumb. I’ve been told the movie finishes strong through, so maybe tomorrow.

This week I introduced Victor to three schools of country music, including the amazing soundtrack from the Coen Brothers’ “O Brother, Where Art Thou?”, Waylon Jennings, Kris Kristofferson, Alison Krauss (with and without Robert Plant) and k.d. lang. We gave Béla Fleck a shot, but… you know.

...diagnosed with manic depression in 1989, for the next 14-years I lived without treatment or a recovery plan. I've been homeless, one time I graduated college, I've won awards for reporting on Internet privacy issues, and a weekly humour column. In 2002 I finally hit bottom and found help. I have an 8-year old son, and a 4-year old son... I’m usually about six feet tall, and I'm pretty sure I screwed up my book deal. I mostly blog at saltedlithium.com....
View all posts by Gabriel... →
This entry was posted in crazy people with no pants, Health, Little Victor, Living With Depression, Living With Manic Depression, Mental Health. Bookmark the permalink.