What happened the day my daughter died 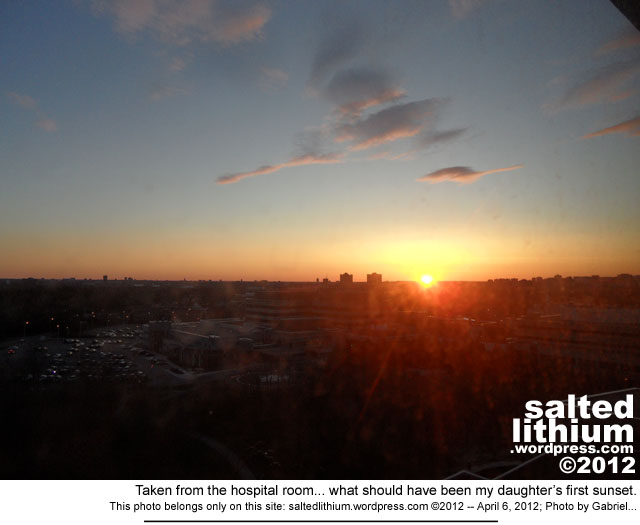 Everything started to fall apart early Friday morning. Diane’s water broke on Monday, but the doctors believed she and the baby could last to the 24-week mark, when our baby girl’s lungs would be better developed.

But by early Friday morning Diane was in pain and the doctors found evidence of an infection. That meant our baby, Evangeline, just days away from being 23-weeks, had to come out.

So Diane started texting people, starting with me. But I had been up most of the night writing, then up early to feed Victor. I put Victor down for an early nap around 11am, then fell to sleep myself.

I didn’t get the message until 1pm, when her father banged on my door. By that time the doctor had confirmed the infection and was inducing the delivery. If, as he suspected, the infection had spread to the baby she wouldn’t survive. So Evangeline’s best hope was the delivery.

When I finally walked into the delivery room I still believed there was still a chance Evangeline would have made it. That I would see her tiny body in an incubator. I was preparing myself for months in the neonatal critical care unit.

When I walked in a nurse asked who I was, I told her I was the father of the baby. She asked Diane if it was okay if I came in. I looked around the curtain and saw Diane was sitting in the middle of the room on the birthing bed, doubled over so her face was in her knees. She yelled “yes”, and there was pain and exasperation in her voice, and that was when I knew our baby was gone.

I had missed the delivery by fifteen minutes.

Just inside the door was a small work station, and a doctor washing his hands. He turned to me and put his hand out, he gave me his condolences, then explained that Evangeline had died during the delivery. That she was just too small, and had basically been squeezed to death.

But my attention, since I had entered the room, was mostly taken up by a cart next to the wall. On it was a tray, and on the tray were a few stainless steel bowls, and in one of the bowls was a grey and purple mass. Almost a bubble. For the next hour I would be convinced, irrationally, that it was what was left of my daughter.

I went to my girlfriend, rubbed her back and told her I was there. She was angry, for less than a minute, that I hadn’t been there earlier. I looked at her sitting there, her two gowns soaked in fluids, the blanket and matting she was sitting on covered in blood.

I knew, from the ultrasounds, she had my lips and her mother’s cheekbones. And now she was in a bowl in the corner of a blood soaked room filled with automatons performing the exact same actions they made nearly every day. Just getting the room ready for ‘next’. When I looked over at the tray someone had placed a green towel over the bowl.

I left to get my girlfriend something to drink. But mostly just to be alone. When I came back the cart had been moved to the hallway. I was convinced it was Evangeline when, of course, it wasn’t. But in that moment I got so angry that my daughter had been left alone, and that I wasn’t doing anything to fix the situation.

It was then, just as I was walking into the delivery room, that I realized what was in the bowl was the placenta.

Immediately I wanted to know where they had taken my daughter, but at the same time I didn’t want to push Diane. I wanted everything to move at a pace she could be comfortable with.

Roughly thirty minutes later, while we were alone, I asked where they had moved the body. And Diane, still in a haze from the pain killers, and still in shock from what had happened, told me that, not only did she not know where Evangeline was, but that it was possible she had been breathing when they removed her from the room.

I left the room and found the doctor and asked him to tell me what actually happened.

One hour before the delivery Evangeline’s heart rate was exactly where it was supposed to be, the ultrasound showed her moving exactly how she was supposed to move. She was healthy, the area around the cerclage wasn’t, so the decision was made to induce.

During the delivery Evangeline struggled and ended up coming through the birth canal bum first. And that’s when she died.

Shortly after I went back into the room the doctor showed up and asked if we wanted an autopsy done. Diane looked at me, I don’t think either of us could take the image of Evangeline’s tiny body being torn up. I told the doctor our daughter had been through enough.

About an hour after the delivery we let the nurse know we were ready to see Evangeline. She brought our baby in, wrapped in the same style of hospital blanket they had wrapped our son in 2.5-years ago. They had dressed her in a pink, wool dress.

They hadn’t finished cleaning her yet, so there was blood on her forehead. She handed Evangeline to my girlfriend first, she was very tentative. Very quiet. The nurse left us alone. We opened the blanket a little, exposing her entire face and her arms.

Evangeline’s right hand looked like it was grasping at something, so Diane put her finger in her hand. I took a picture. It looks like they’re holding hands.

I held my daughter for ten minutes. Maybe longer. I walked to the window so I could see her in the sunlight. I told her she would have been great. I told her I was sorry I couldn’t do more.

She was so small. She had long, slender fingers, her mother’s cheekbones, I think she had my nose, even though they were closed I could tell she had big eyes, she had full lips and her oldest brothers smirk.

She was just too small… another five days and it would have been different.

I stayed in the hospital with Diane that night. I didn’t want to, I really wanted to just go off by myself and grieve. But I stayed because she wanted me to. Originally the doctor wanted Diane to stay until Monday, but early Saturday morning a nurse told Diane she might be able to go home later that day. And that was it.

My step-father drove us home Saturday afternoon. I made sure she was safe and sound in her home before I went home and started to write. I wrote an update on my other blog, and I cried. Afterwards I went to Diane’s and we watched 007’s Casino Royale, and then I came home and slept until Sunday afternoon.

Before we left the nurse gave us a box with Evangeline’s possessions in it. The dress, her hand and foot prints. Some other stuff — I haven’t looked in it yet. There’s also a purple silk butterfly in it, the wingspan is about the width of a coffee cup.

When a woman is on the maternity ward, after losing her baby during childbirth, the nurses tape a butterfly to the door so they know.

...diagnosed with manic depression in 1989, for the next 14-years I lived without treatment or a recovery plan. I've been homeless, one time I graduated college, I've won awards for reporting on Internet privacy issues, and a weekly humour column. In 2002 I finally hit bottom and found help. I have an 8-year old son, and a 4-year old son... I’m usually about six feet tall, and I'm pretty sure I screwed up my book deal. I mostly blog at saltedlithium.com....
View all posts by Gabriel... →
This entry was posted in Clinical Depression, crazy people with no pants, CSG, Health, Living With Depression, Living With Manic Depression, Mental Health, Ottawa, Pregnancy and tagged Family, Fatherhood. Bookmark the permalink.

20 Responses to What happened the day my daughter died