How I ended up being one of the first Internet users in Canada; why I owned a pirate shirt and a photo of my mohawk 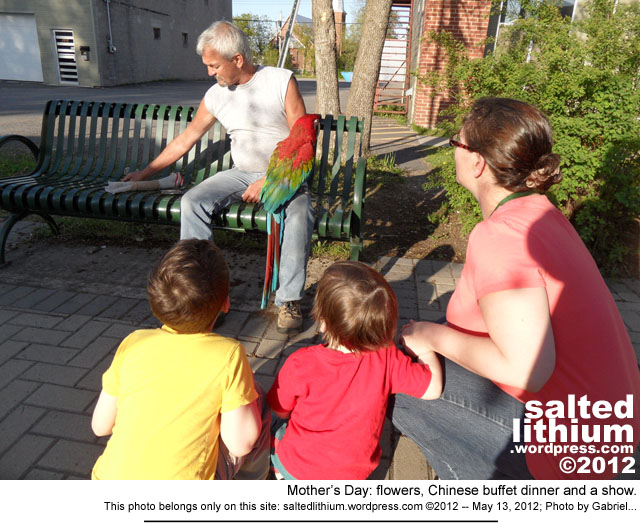 When I was twenty-two I owned, and proudly wore, a burgundy coloured pirate shirt. It had puffy sleeves, a long v-neck with laces, and — if I let it — it hung to my knees.

It was awesome. I had a crazed wardrobe back then. There was a store in The Rideau Centre — the downtown-Ottawa mall — that sold patterned silk dress shirts imported from Lebanon. I think it was 3 for $12. They lasted a week or two, but then the collar or the cuffs, or anywhere they was a button, would start to roll up until there was nothing you could do to keep your belly from showing.

And the colour schemes were just nuts. I can remember one that was fourteen different shades of brown in irregular circles, all roughly 2-inches in diameter. I only managed to get to the store a couple of times before it disappeared but, still, that was at least six shirts.

The thing was, every time I went out looking for clothes, I would have been just looking to buy a few black T-shirts. But, because I was on Social Assistance and my total income after rent was barely $120 / month, I’d get to the mall and panic… I only had X-amount of bucks, so I’d convince myself I should get the best deal in that moment. Which was generally 3 of whatever for less than $15.

I’d walk around the Rideau Centre for an hour or two, comparing every deal against every other deal.

Which makes the purchase of the pirate shirt all the more weird. At the time I was living near the Russian embassy in the huge basement apartment of an old ten-storey building with a childhood friend and a gajillion cockroaches.

My friend, lets call him “Jay”, was a multiple cultural pioneer. We both worked at the University of Ottawa community radio station — I worked as a producer for their drive show, and he had a weekly four-hour show featuring all that was new in Industrial Music. Stuff like KMFDM, Ministry, Lords of Acid, Nine Inch Nails, Vampire Rodents, My Life With The Thrill Kill Cult… basically anything with a mouse-heart-on-meth back beat [all YouTube links are SFW].

Jay and his parents had also been involved with computers since the early-1980’s, mostly through a popular software and gaming store, but really mostly because they were some of the original gaming software pirates. If you lived in Ontario or Quebec during the 80’s, and played a hacked version of a PC, Vic20 or C64 game, you were probably playing their product.

So it made sense Jay would also be one of the very first people in Canada to have a modem. 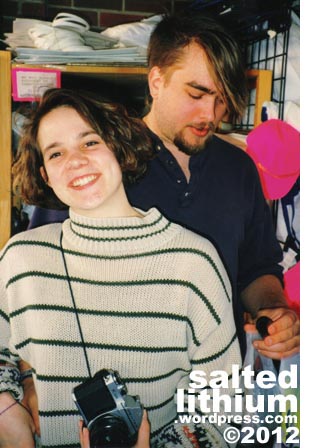 This was also about the time when I cut my hair into a ginormous mohawk — which I doubt I’d have had the nuts to do if I hadn’t been living with Jase, who mostly had black dreadlocks since the nineties started.

I never coloured it, but my mohawk was roughly eight inches long and four inches wide. Which was nuts because I was dating a Jehovah’s Witness escapee at the time, and the craziest thing I remember her wearing were the friendship bracelets she made. She even wore the band T-shirts I bought her tucked into her pleated shorts.

Thankfully she stayed with me during this period because I did love her, and she was spectacularly hot. Also thankfully her father never pulled a gun on me, despite me showing up for Sunday dinner over and over again wearing a pirate shirt and a massive shaggy mohawk.

Jay was also a revolutionary in the field of body piercings and pirate shirts, in that on the day he had his nipples pierced he bought a black pirate shirt so they wouldn’t chafe — later on he was also a pioneer in wearing skirts because of multiple genital piercings.

Which, thank God, I never did. But I did find out where he bought his pirate shirt, and I did head downtown immediately to get one of my own. It was surprisingly cheap, but I think I would have bought one regardless. I almost bought a black one, but then we’d be some kind of weird team of bad-hair industrial pirate punks.

Which we kind of were.

…anyway, I just wanted to write something non-grave related, and this is what popped into my head.

…Jase and I split up after six months. We still owe the landlord two months rent, which we refused to pay because he wasn’t taking the cockroach situation seriously. I was killing sixty of them every night before turning off the lights and going to bed. After a while Jay stopped cleaning the roach carcasses off his wall, he was leaving them there “as a warning to the others”. It didn’t work.

I spent the next few years trying to clean myself up, mostly in an attempt to keep my girlfriend from dumping me. I cut my hair, tried to find non-print shirts to wear, I found non-roach infested apartments. Didn’t work, I was just always too bipolar for her.

Meanwhile, Jay went on to rewrite the rule books of one of the most popular roleplaying games of all time. He ended up publishing about a dozen books through them. He was also one of the original hackers. He got into a lot of trouble a few years ago for doing something stupid, so now he’s banned from the Internet.

My pirate shirt survived another eight years. But, as I was moving out of a shared apartment, my idiot roommate mistook a garbage bag full of clean clothes for actual garbage, and tossed it out.

The girl I was in love with back in 1992 dumped me eighteen months later, when I had a relatively normal haircut. She contacted me through Facebook two years ago to apologize. She has a little girl who looks just like her mom, and a husband who looks a lot like me.

I don’t know what happened to the cockroaches, but I assume they’ve turned Jay into a cautionary tale for their kids.

...diagnosed with manic depression when I was nineteen, for the next 14-years I lived without treatment or a recovery plan. I've been homeless, one time I graduated college, I've won awards for reporting on Internet privacy issues, and a weekly humour column. In 2002 I finally hit bottom and found help. It's now 2022, and I have an 8-year old son, and a 12-year old son... I’m usually about six feet tall, and I'm pretty sure I screwed up my book deal. I mostly blog at saltedlithium.com....
View all posts by Gabriel... →
This entry was posted in Clinical Depression, crazy people with no pants, Entertainment, Health, Humor, Humour, Living With Depression, Living With Manic Depression, Mental Health, No Post Day. Bookmark the permalink.

6 Responses to How I ended up being one of the first Internet users in Canada; why I owned a pirate shirt and a photo of my mohawk