Updated: A gravestone update plus a video of me pushing my son around and some thunder 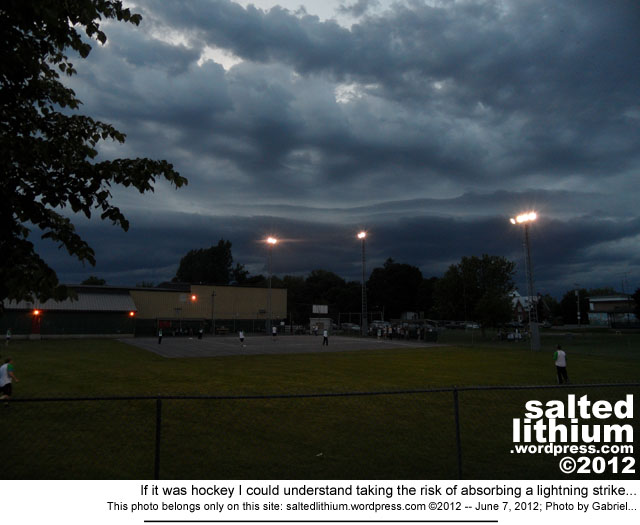 Whoops, I screwed up the security settings on the videos… sorry about that. They’ll work now.

In its 100-year history the company constructing the headstone for our daughter has never, ever, had a request to have the family there when the stone is installed.

We’re the first, and they’ve been very confused about it. I think they believe we don’t trust them to do a proper job.

But it just seems like a logical piece of the process, at least to us.

The stone is bigger than we planned. They’ve added four inches horizontally, and at least two inches vertically, because when the stone sits in the ground they expect grass to grow over the edges.

I wanted to go with “Forever can be a day”, but no one else seems to like it like that.

The stone was supposed to be installed on Friday, but they rescheduled until Saturday morning, and now it won’t happen until Monday at 9am. Our plan is still to place a list of the names of people who donated towards the cost of the stone — which ended up being $1017. I’ve done the math to the best of my ability, and in total the donations were $650.

Which was way more than I thought people would send. I ended up covering the rest myself because there have been problems with my girlfriends Employment Insurance / maternity leave / health leave benefits.

Her second-to-last cheque is now two weeks late. Which means, in addition to covering the remaining cost of the stone, I’ve also been covering the cost of milk, food, diapers… life stuff — my girlfriend has an infected tooth, so I had to cover her dentist appointment, as well as her car insurance.

At this point I’ve spent most of my June rent on non-rent related stuff, so take that Mr. Landlord. The government people promise she’ll receive her cheque by next Thursday. She’s going back to work in July, which — for a while — means we’re back to a 5am – 6pm schedule.

In that, she’ll be leaving for work at 5am and won’t be home until 6pm. So, because her oldest is done school in ten days, I’ll be looking after both kids.

Which didn’t work the last time when it was just Victor and myself, I’m thinking that the addition of my girlfriend’s oldest son into the mix is not going to go well. Maybe for the first few days, maybe, but after that… probably not.

Maybe I’ll get lucky and have a stroke.

This is a quickie video my girlfriend made of me and our son at the park… I’m the one in the black T-shirt.

This is a few minutes of a thunder storm from a few days ago. There’s been lots of weird weather recently, including some tornadoes, and a few almost-twisters. This one dumped pea-sized hail for almost five minutes. Plus you get to see the view from my balcony.

...diagnosed with manic depression when I was nineteen, for the next 14-years I lived without treatment or a recovery plan. I've been homeless, one time I graduated college, I've won awards for reporting on Internet privacy issues, and a weekly humour column. In 2002 I finally hit bottom and found help. It's now 2022, and I have an 8-year old son, and a 12-year old son... I’m usually about six feet tall, and I'm pretty sure I screwed up my book deal. I mostly blog at saltedlithium.com....
View all posts by Gabriel... →
This entry was posted in Clinical Depression, crazy people with no pants, Depression, Health, Living With Depression, Living With Manic Depression, Manic Depression, Mental Health, Poverty, YouTube. Bookmark the permalink.

2 Responses to Updated: A gravestone update plus a video of me pushing my son around and some thunder