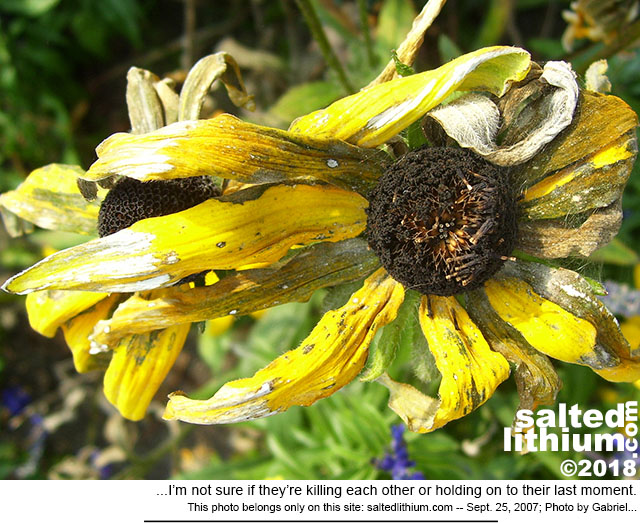 “The signs I’ve slid into a depression should be obvious to me by now. After almost two decades I should at least have a check list by my door, or beside my bed.
Dressing in black for days on end is generally a dead giveaway, especially if it’s always the same shirt, socks, underwear and pants.
I’ve been sleeping for twelve hours at a shot, then never feeling fully awake for the next twelve. Over the past two weeks I’ve been outside for more than fifteen minutes in a day maybe four times… I’ve been outside every day, but only a quick walk to the store for supplies, then home again..”
Salted Lithium “The True Nature Of My Being”;
October 10, 2010

I had a phone interview with a representative from the local Centre for Addiction and Mental Health yesterday (not its real name, but essentially that’s what it is).

She was evaluating me to find out if I need a referral to a new psychiatrist, or just a therapist, or if I needed help at all.

She asked the usual questions:

Do you drink? A few Guinness (Guinnesses? Guinnessi?) this year. Nothing for eight years before that.

Do you use drugs? I have in the past. How recently? Not since I was a kid.

Do you hallucinate? I wish.

Can you read thoughts/or can others read your thoughts? Blah blah blah… the intake interview was supposed to take between 20-40 minutes, I think we got through the whole thing in fifteen.

She didn’t ask me if I talked with Satan. The intake people always asked me that one in the past. They did ask me about my ability to concentrate, which I don’t have, and my patience levels… they asked me if I had self-harmed in the past — I told them I used to burn my arms with lit cigarettes, but not since I was a kid… and a few years ago I dropped a red-hot knife on my arm a few times. And they asked how likely was I to harm myself recently… not at all.

Then she got into the fun stuff… is there any history of mental illness in the family? Heh. Were you ever abused? Fuck yeah. Sexual, physical, or psychological? Yes; not really; fuck yeah.

I told the woman I’ve been depressed for the past year, not suicidal, but depressed. I’ve been taking my medications regularly but I can go a week without showering. Right now, I’ve been wearing the same change of clothes for as long as I can remember. Once I get the kids to school in the morning I go back to bed and sleep until I have to pick them up in the afternoon.

This has been my “normal” for the past year. Maybe two. I’ve been depressed without being depressed. I scroll for hours on Facebook with the TV on in the background to avoid writing. I haven’t taken a decent photo in a year, probably a lot longer than that.

I eat once or twice a day, but I think I’m actually gaining weight, so maybe I’m eating more… or just eating more crap than I should. I can’t seem to keep track. I do go to the gym 4-6 times a month, but I should be going a lot more often because I pay a trainer for more sessions than that. But I just can’t wake up for an afternoon session.

Whatever routine I had, especially the one I used to beat back the depressions, is gone. I’m in bed at midnight, up at 8am; I get the kids to school; I crawl back into bed, sleep for another 4-5 hours; get up, take my medications, go for a drive to the grocery store to pick up supper; pick up the kids from school; we eat supper, and I entertain them until bedtime. Then I turn into a vegetable in front of CNN or SportsNet for four hours, take my meds and go to bed.

I do make sure the kids are clean, that their homework is done, that they eat and we play together, and that Victor practices his guitar. But then I don’t take my insulin when I eat. I’ll eat four cookies as a late night snack. I’ll eat a chocolate bar, or a bag of chips. I won’t check my blood sugar for a month… actually, I haven’t checked it in more than two months now.

She asked me if I was suicidal, and I told her no. I am not at risk of dying anytime soon. But that’s not entirely true.

The depression will kill me through the diabetes. Or at least take years off my life. Untreated it’ll definitely interfere with the kidney transplant.

It’s like I’m trying to abuse myself in the least noticeable way possible.

I didn’t tell her that. But I was honest with her. I spoke more openly with her in fifteen minutes than I had with my psychiatrist in the year before he retired in July.

…so now I’m on a list. She wants me to see a psychiatrist. Unfortunately, she told me, the average waiting time to get an appointment with one in this region is eight months. In between then and now I’ll be seeing a psychiatric nurse. Which is something I’ve never heard of before. But apparently they can help me with my meds. But that will take a few months as well.

In the meantime they suggested I try writing about how I’m feeling and to get involved with something called ‘The Big White Wall’ (bigwhitewall.ca), it’s an online anonymous peer support community dedicated to helping people with mental health issues. It has a lot of smiling people on the splashpage, so I guess it works.

...diagnosed with manic depression in 1989, for the next 14-years I lived without treatment or a recovery plan. I've been homeless, one time I graduated college, I've won awards for reporting on Internet privacy issues, and a weekly humour column. In 2002 I finally hit bottom and found help. I have an 8-year old son, and a 4-year old son... I’m usually about six feet tall, and I'm pretty sure I screwed up my book deal. I mostly blog at saltedlithium.com....
View all posts by Gabriel... →
This entry was posted in Appointment Day, Bipolar Disease, Bipolar Disorder, Clinical Depression, crazy people with no pants, Depression, Health, Intervention, Psychiatry, The Big White Wall. Bookmark the permalink.