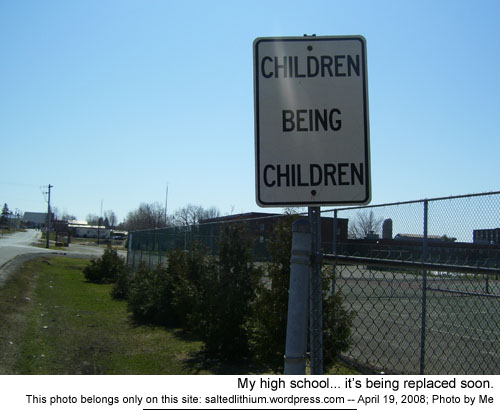 There is a brand new PlayStation 3 sitting on my coffee table. It came in a large box from a BestBuy in Toronto. It is black and shiny. When I turn it on rainbows appear in my apartment. And unicorns. And I’m pretty sure angels sing. And Princess Leia in her slave-girl outfit is pouring me a really large, really cold glass of 1% milk.

But I don’t see any of them because there’s a PlayStation 3 on my coffee table… and it’s black and shiny.

I’m trying to figure out how to describe… it’s like when Neil Armstrong turned around, looked up and saw what’s his name standing in the doorway, that’s how it feels now when I look at my PlayStation 2: “uhm, sorry… and what was your purpose again?”

Actually now I have the complete set. My little grey PSOne, with its quaint pop-up top and “CD quality” games is somewhere in my bedroom. I guess the PS1 would be the guy stuck driving the Command Module while Armstrong and the other guy danced around on the moon.

My brother sent it to me. But from what I understand he didn’t pay for it… a couple of months ago he was hired by a large chain, lets call it High-End Coffee, to manage one of their stores. In the service industry it’s pretty common to play “lets barter for stuff because none of this crap really belongs to us.”

Sometimes my brother reads this blog, and I think he was worried about my state of mind after some things happened… or stopped happening a few weeks ago. I did get depressed, but it was normal. It actually felt normal… by that I mean recoverable. There were reasons for the depression, and I knew I could deal with those reasons.

And now I have a PlayStation 3, and it’s black and shiny and it’s sitting on my coffee table. And I think that’s a unicorn singing in the corner.

Spider-Man Three, which came with the box, sucked goat teat. I actually found it insulting.

Spidey was my second favourite childhood superhero, right after Wolverine. I actually own the comics the movie was based on. Some of which, actually, also kind of sucked. It was this totally messed up super hero crossover thing involving all of Marvel’s characters called “Secret Wars”.

Everyone got taken to an alternate reality and, yadda yadda, Spidey comes back with an alien for a suit. Everything’s fine for awhile, then the suit starts to… I don’t know, make Spidey react in more expressive ways.

So, a totally new comic series called “The Web Of Spider-Man” is created and in the first issue Spidey fights against the suit… I still have the first 60 copies of Web in my mom’s attic.

So… Spider-Man Three, directed with great, almost purposeful ineptness by Sam Raimi, is based on that comic book.

The entire first 45 minutes of the movie is a dismantling of all the things they did right in the first two movies. I mean, Mary Jane gets fired from a Broadway play and she doesn’t tell her boyfriend for… what, like a week? And Harry’s butler spends months living with him without letting poor Harry know how his father died? WTF?!?

The main villain, Venom, is quite possibly the coolest and most dangerous villain Spidey ever fought against. In the movie we have to wait until the last twenty minutes before Venom and Spidey go at it.. in the meantime we get the entire backstory of one of Marvels weakest creations, The Sandman.

Then… towards the end there are scenes of crowds cheering on Spider-Man as his ass is handed to him by Venom, and it occurs to me… there’s no threat to anyone outside of Spidey’s group. In the first one, The Green Goblin threatens to… well, blow up a lot of stuff then gets thwarted by Spider-Man, to whom he turns his attention.

In the second one Doctor Octopus basically wants to blow up the Universe, but is thwarted by Spider-Man, to whom he yadda yadda…

In the third one Sandman wants to steal money to pay for his kids operation… so, basically, Sam Raimi ran totally out of ideas.

Inevitably Wolverine beats Spidey. But that was a comic worth turning into a movie.

…screw it I’ve got a black, shiny PlayStation 3 behind me… and Princess Leia has my glass of milk.

...diagnosed with manic depression in 1989, for the next 14-years I lived without treatment or a recovery plan. I've been homeless, one time I graduated college, I've won awards for reporting on Internet privacy issues, and a weekly humour column. In 2002 I finally hit bottom and found help. I have an 8-year old son, and a 4-year old son... I’m usually about six feet tall, and I'm pretty sure I screwed up my book deal. I mostly blog at saltedlithium.com....
View all posts by Gabriel... →
This entry was posted in Bipolar Disease, Bipolar Disorder, Clinical Depression, crazy people with no pants, Entertainment, Health, Lithium, Living With Depression, Living With Manic Depression, Manic Depression. Bookmark the permalink.