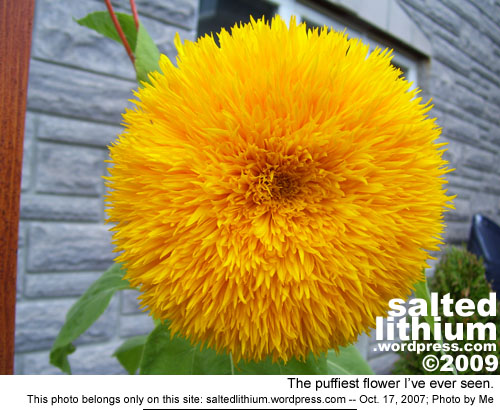 My name is officially changed… it took two years when it should have taken six weeks, but the last piece of my father’s identity has been removed from my wallet.

My new birth certificate came in the mail yesterday. It’s purple. It has the name I was born with in the “old” column and the one I’ve chosen to replace it with in the “new” column.

I started the process in April, 2006, by getting the application from my local MPP. The easy part was choosing the replacement name because I’ve actually been using my mom’s maiden name since a year after the divorce in 1978, because in Canada, as long as you’re not trying to commit fraud, you can actually use whatever name you want.

So since I was about nine I’ve had two different names. Until now my Official name, the one on my original birth certificate, went like this… Gabriel, then my father’s Given Name followed by his Family Name. So Gabriel Father Father.

But since the divorce all of my school, health, tax, disability and work records are filed under Gabriel Father Mom, with only my Social Insurance Number under Gabriel Father Father. It really only made things difficult when I was applying for social assistance… funny story, during the years when I needed to be on welfare I tried to make it a point to have the records under my father’s family name.

Even though I rarely used his name it was still a block to my life. It prevented me from doing certain things. Like getting a drivers licence. One of the reasons I didn’t apply for college or university sooner was because my high school guidance counsellor told me, mistakenly, I’d have to make the change official before making the application. The person at the Ministry of Transportation told me the same thing about the licence.

Back in high school I was really hesitant about making the change. Tearing my father from my identity was something I didn’t know how to do, and it’s not something a child should be asked to do on his own. I also didn’t know what was laying past that curtain.

Plus I was still asking questions about who he was… and trying to figure out what parts of me came from him. I actually got involved in student politics for a few weeks until someone called me their “leader”, and an image of him as the head of the political collective I grew up in popped in my head so I quit. Eventually my father’s name just slid into the dark.

My new name is Gabriel Grandfather Mom. I chose my grandfather’s name, Victor, to be my middle name partly because I decided “Johnny [edit]” was just too irreverent and I wanted the name to have some meaning… plus, at that moment, he was the only man in my life I could think of who meant anything.

I admit I had some expectations in my head when I chose the name. When I finally told my grandparents about the new name those expectations just felt silly. There were no hugs, no clap on the back or firm handshake. My grandfather just kept doing whatever he had been doing and my grandmother asked why I would even bother.

I realized in that second that I had made a mistake. Not because of their approval or disapproval of the name, but because I’m still not even sure where my grandfather fits in my life.

Basically I feel like I’m swapping a jackass for a mule and trying to convince myself it’s really Secretariat.

My grandfather was someone who, during my first nine years, I saw for a few days a year at his hobby farm. There are a few photos of us together, including one of me sitting behind the wheel of a tractor and him standing beside me. Him bare chested, tall with a management gut and a handkerchief tied around his head. Me, two-years old and in diapers, long blond hair and a red shirt holding the steering wheel and smiling.

It’s like I can point to his achievements and see one man, see the man who anyone would want as a grandfather or mentor… but then I pull back and realize he hasn’t taught me anything. It wasn’t desperation, I was never desperate to have a father. Desperation, to me, means understanding you’re doing without something. I never understood what was missing.

My father abdicated all responsibility a few years after I was born. Even though we lived in the same house I spent the first nine-years of my life not even knowing who my real father was. Growing up like that is like being born blind and assuming everyone else is as well. You have to be told a sense is missing.

When I was with my grandfather it was like seeing shapes through a haze. You’re aware of a new sensation, and even though it’s partial you feel like it’s a whole. Like you thought you had everything, but here’s this new thing. And you love it… like I loved my grandfather and thought I was whole for having the days and weeks with him.

My grandfather had led a remarkable life. As an engineer he worked on most of the largest construction projects in Canada. He was project manager on the Churchill Falls Dam and the Mount Macdonald Tunnel in the Rocky Mountains, which is still the longest railway tunnel in the Americas. Thanks t mom his papers are now housed in the Canadian Centre For Architecture in Montreal where he became the first non-architect to be inducted.

When we visited my grandparents at their hobby farm in Quebec he would take us to church on Sunday. The service was in French, a language we didn’t speak. Then it was a hot dog at a local diner, and then visiting people on the way back to the farm. But it was like my brother and I weren’t even there. We couldn’t speak to him in church, or when we ate or when we visited people.

We couldn’t ask him questions because we’d frustrate him with their frequency. Instead of teaching us how to work a chainsaw or a hammer he’d have us stand quietly behind him while he worked. But I paid attention, I watched and even thought I was learning something important. But I was an illiterate holding a book and fooled into thinking it was the spaces between the letters that meant something. He wasn’t a mentor, he was tolerating us because his wife was tired of us being in the house with her.

Whether my mom is right, or the break in that relationship came from somewhere else, my mom was definitely abused by her mom physically and mentally, and neglected by her father.

As proof of her theory mom points to the fact her parents have given my mom nothing, but given her brother everything. Cars, mortgage payments and recently a two-week trip to Cuba. In the will my uncle gets properties, stocks and cash worth seven figures, my mom gets $25,000 so she “won’t be a burden on her husband”. Direct quote from the will.

So mom runs away from home and marries my father, who’s ten-years older than her. My father abuses her emotionally and abandons her and their children. Which leaves me searching for a father figure and finding it in the first man who abandoned her… but he’s still not interested in being a father to her or her offspring.

My uncle’s two oldest children received a paid education, while his son’s hockey equipment was paid for every year. My grandfather has never missed a game. My grandfather is not a monster. He did things for me, he taught me how to drive. But he was a hockey star in Ontario when he was a young man yet never taught my brother or myself how to skate.

I’ve slowly discovered that over my entire life I’ve been caught in the middle of a much longer Cold War between my grandfather, grandmother and my mother.

I don’t think I’ll change my name again until after he has passed on. But I am going to change it… I’ll probably end up keeping his last name. All of my press clippings are in that name so it would be too complicated to be changing it now.

The relationship between my grandfather and myself has gotten a lot more complicated over the past two years… but I’ll write about that later.

It is interesting to note, however, that once my brother changes his name from Him Mother Father to Him Mother Mother, our father will have released five children to the world but none of them have his name. That actually makes me smile.

...diagnosed with manic depression when I was nineteen, for the next 14-years I lived without treatment or a recovery plan. I've been homeless, one time I graduated college, I've won awards for reporting on Internet privacy issues, and a weekly humour column. In 2002 I finally hit bottom and found help. It's now 2022, and I have an 8-year old son, and a 12-year old son... I’m usually about six feet tall, and I'm pretty sure I screwed up my book deal. I mostly blog at saltedlithium.com....
View all posts by Gabriel... →
This entry was posted in Bipolar Disease, Bipolar Disorder, Bud, Classic, crazy people with no pants, Family, Father, Health, Living With Depression, Living With Manic Depression, Manic Depression. Bookmark the permalink.