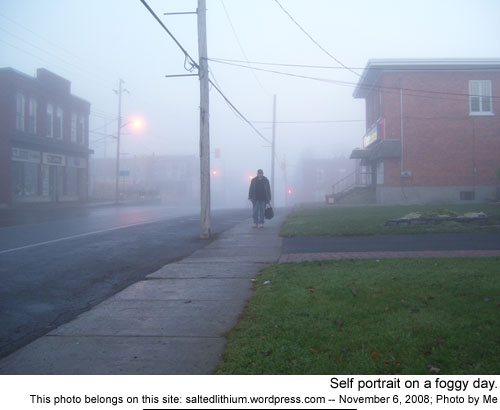 “…my father believed he was a great man who was in the middle of a great revolution, and things get sacrificed during revolutions. Like family…. The truth is pretty simple, however, my father told lies that corrupted and nearly killed the people who trusted him.”
“A Lying Maoist Revolutionary Con Artist Stole My Family…”; June 25, 2007

In the city where he lives my father is celebrated as an advocate for the poor, he shelters the homeless and fights with all of his considerable intelligence and guile to make life better for the disenfranchised.

Every few months the newspapers in the city where my father lives will write a feature, or an article, featuring both him and his fight against poverty. Each one adds to the myths my father has created to mask the devastation he has brought to my family.

My father was the leader of a small, but determined band of Marxist True Believers, which included my mother, his youngest brother, and their friends. Ten years after it had begun my father had managed to betray and humiliate everyone who cared for him, and everyone who believed in him.

My father’s protection from being exposed as a philanderer, a pathological liar and a comes from the guilt and shame of the people who could expose him for what he has done. My father’s infidelities began while my mother was in the hospital recovering from the birth of my younger brother, from which she almost died.

Eventually they ended several years later with the revelation my mom’s best friend was pregnant with my youngest brother, and the dissolution of both his marriage and the political group he had started.

After eight years of believing in him, in his vision, he was exposed as being the leader of his own sex cult. Yet somehow he has managed to rehabilitate his image so that, thirty years later, he is being Sainted by the local newspapers.

And if someone, someone who used to stand beside him, were to raise an objection or write a letter to the editor exposing some of my father’s behaviours, their own involvement would be exposed. “Sure, I’ve done some pretty stupid shit,” my father would say, “but they followed me right into the pile.”

And if I were to stand up and say “here, this is my father’s name and here is what he has done”, then who gets caught up as collateral damage? It took my mother twenty years to recover from the damage caused by my father. She’s respected in her community, she does not deserve to relive any piece of any of the horrors she lived through.

Or what about my two little sisters? They grew up not knowing anything about their three brothers. Of course, he couldn’t tell them. He couldn’t tell anyone, because then the questions would start, questions he still can’t answer.

Last year a reporter asked him about his family. He says he is “proud of them”.

But the reporter didn’t ask “how many”. So my father was able to respond using the kind of vague word games he loves so much.

According to the same feature his backstory is missing seventeen years.

In the years after the divorce my father put together groups which collectively own huge amounts of property which house people with no other place to go. According to some of these articles he has raised over a million dollars to protect other people. But nothing about the seventeen-year gap ever appears in any of the stories written about my father.

My father went, within just a few years, from being a man who had spent eight years ignoring his children, cheating on his wife and someone who had betrayed everyone, to being the father of two adoring daughters and a fighter of injustice and poverty in his community.

In order to make his new life work, if he wanted to save himself, he couldn’t tell people about the detestation he had caused. He couldn’t have people knowing he never paid child support, or that he had a son he had never met. Because good fathers sacrifice for their sons, they don’t sacrifice them.

My father has pretended to be a revolutionary for over thirty years. It’s how he has always seen himself. But my father was never a revolutionary. Revolutionaries sacrifice for their cause, but he never had a cause beyond his own self-preservation and the only thing my father ever sacrificed was me and my brothers.

My father calls himself an alcoholic now. But no one I’ve interviewed who knew him as a younger man can remember him drinking, and there was a strict “no alcohol” rule in the collective. My father has always told stories about his past. Almost all of them are lies, and the ones which are true have become even more distorted each time he tells them.

And still he remains protected because his victims, by exposing his abuse, also expose themselves as having been victimized. The infidelities which started while he was with my mother, continued into his relationship with the mother of his two daughters.

He allowed his daughters to grow up thinking he was a hero in his community. A man who could do no wrong. Then, because our meeting was becoming inevitable, he told them about their two brothers. Then left it to us to tell them about their third brother.

In many ways they’ve become estranged from him as they try to reconcile the father they knew with the man he has been exposed as. And as they do this he is still considered a hero in their community. And their separation from him becomes another sacrifice he can point to as proof of his heroic credentials.

Look at how he can endure. The people in his life abandon him and still he continues to save the lives of others. Look at how he has been abandoned by his wife and their two sons, by his mistress and their son, by his longtime partner and their two daughters, and yet still he houses the poor. Still he raises thousands of dollars to buy new facilities. Still he roams the streets looking for people in need.

The only way he could save himself from being exposed as the person he was, was to create a fiction even greater than the reality. The only way for him to not be exposed as the man who abandoned his three sons, as a man who had sex with women who so deeply believed in his cause, who devastated the lives of the people who trusted him, was to lay down a foundation.

A foundation laid out in newspaper articles where he is sought out by reporters looking for quotes or sources from the serious man with the piercing blue eyes and the big white beard, both of which took up four paragraphs of a feature article on my father.

My father is not a cartoon, but every article quoting him might as well be quoting one. I don’t believe my father takes pleasure in hurting people. Especially his children. But it does feed into the image he has created for himself. Because of the choices he has made he no longer has a choice but to live in the misery he has caused, and it’s a misery which elevates his credibility in the one area he has left. And so long as no one steps forward to say “no, he made these choices. He did these things.”, his credibility will stand.

There is no one else. There are no other causes for any of this. Why did my sisters grow up without their brothers? There are no other reasons than the choices our father made. It wasn’t my mother’s fault he cheated on her several times, it was his choices. There was no other reason for the divorce than his choices. He chose not to pay child support, he chose not to have any contact with my brothers and myself.

My father runs a housing centre, a food bank, a youth shelter and a place where street kids can be creative… but what he can’t bring himself to do is make amends, or even attempt to make things right, with his own family who have done nothing to warrant even the slightest of his abuses.

...diagnosed with manic depression when I was nineteen, for the next 14-years I lived without treatment or a recovery plan. I've been homeless, one time I graduated college, I've won awards for reporting on Internet privacy issues, and a weekly humour column. In 2002 I finally hit bottom and found help. It's now 2022, and I have an 8-year old son, and a 12-year old son... I’m usually about six feet tall, and I'm pretty sure I screwed up my book deal. I mostly blog at saltedlithium.com....
View all posts by Gabriel... →
This entry was posted in Bipolar Disease, Bipolar Disorder, Clinical Depression, crazy people with no pants, Family, Father, Health, Living With Depression, Salted Truths. Bookmark the permalink.

7 Responses to Setting Fire To My Father’s Paper Trail