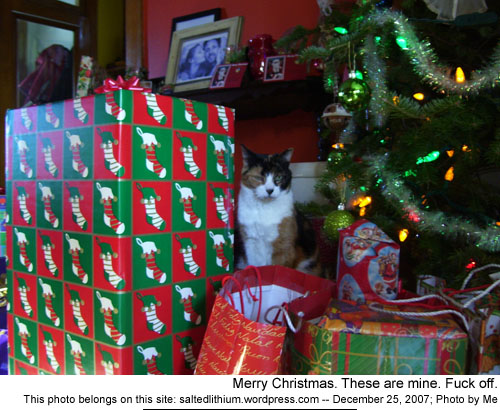 “Despite a commonly held myth that the Christmas season has the highest suicide rate of all the seasons, studies have proven that across North America, suicide rates are actually lower at that time of year. Studies suggest that while the holidays can bring up some very difficult emotions, they also tend to evoke feelings of familial bonds and these feelings may act as a buffer against suicide.”
The Canadian Mental Health Association

There’s a YouTube here of Billy Idol. If you can’t see it please reload,
then contact Google and tell them to stop being evil.

We’ve had a lot of different Christmas traditions in my family. They actually seem to change every five years.

When we actually started to celebrate Christmas on the day itself we would travel into the mountains to my grandfather’s “hobby farm”. We’d go skiing, visit with the neighbours — one of whom was a girl I had a crush on from when I was about seven until… well, it technically hasn’t stopped yet.

We’d kill a tree, decorate it and when my brother and I woke up there’d be presents and bacon.

Five years later the whole show got moved to my grandfather’s cottage, even further back in the mountains. I think I’m still sulking about the move. Everything was pretty much the same, except the tree was always ready when we got there.

Five, or so, years later we moved in with my mother’s boyfriend (now husband of 16 years) and Christmas became something we did at home, and the old people came to us. My step-father started a boot-hockey tournament in the large parking lot across the street from his place.

Every Christmas morning, after the presents were opened and after a quick lunch, we’d play hockey for a couple of hours. Whoever was there would join in… girlfriends, the grandfather’s, my uncle. Usually some of the kids from the neighbourhood would play.

That lasted about six years… maybe a bit longer. But there were two or three Christmases in a row where it was too cold, or there was no snow, then the grandfather’s got too frail.

Something my parents have been doing since they met is attending late night Christmas mass. But it’s a French service so I’ve never gone*. When they were going to the church in town we’d meet afterwards at my grandmother’s house for coffee and cookies. But this year they’ve switched churches and now I’m not sure what’s going on.

*…I was dating someone for the first three years after they started the tradition, and the two hours my parents would be at church gave us the perfect opportunity to raise several joyful noises unto the Lord.

A few years ago we switched the venue around completely. Instead of opening gifts Christmas morning in my parents living room, they rented a local B&B. So the owner cooked and served dinner, then we opened presents in their living room. I understood why my parents did it… they wanted a break from the X-Mas hassles. But I found it extremely awkward. We did that two years in a row.

Thankfully we’re back to my parents’ place. But Christmas has never felt right to me.

What I do know is tomorrow (later on this morning) at ten we’ll have breakfast, then open presents and have lunch before going our separate ways until supper… which is when my grandparents will arrive for Christmas dinner, everything will be just about perfect but my mother’s mother will complain about the stuffing. Then, after my grandfather passes out on the couch after looking for a hockey game to watch, my grandmother will hand out some socks still in their plastic bag from Sears.

There’s a YouTube here of my family waving. If you can’t see it please reload,
then contact Google and tell them to stop being evil.

So, on this most festive of No Post Day’s, these are my questions for anyone willing to play along… remember, Santa and Jesus will hate you if you don’t answer.

What’s the absolute coolest present you ever received/given?

What did you give/receive this year?

Was it worth the hassle?

The coolest ever was when my grandparents and mother teamed up when I was twelve to give my brother and I a Commodore VIC-20. Second place would be last year when my mother gave me a pocket-sized digital camera… in third place would be “a mother’s love”.

...diagnosed with manic depression in 1989, for the next 14-years I lived without treatment or a recovery plan. I've been homeless, one time I graduated college, I've won awards for reporting on Internet privacy issues, and a weekly humour column. In 2002 I finally hit bottom and found help. I have an 8-year old son, and a 4-year old son... I’m usually about six feet tall, and I'm pretty sure I screwed up my book deal. I mostly blog at saltedlithium.com....
View all posts by Gabriel... →
This entry was posted in Bipolar, BiPolar Christmas, Bipolar Disease, Bipolar Disorder, Christmas, crazy people with no pants, Health, Living With Depression, Living With Manic Depression, Manic Depression, Mental Health, No Post Day, Old men in red suits. Bookmark the permalink.