Looking Back Glancing Sideways And Resolving To Keep Moving Forward 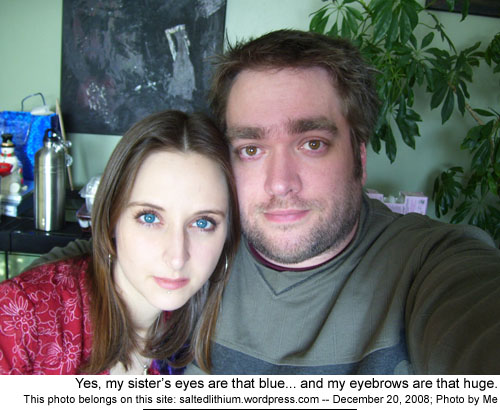 So this is what I know after another year in recovery… fighting the disease comes first. But then there’s the neglected clinical depressions and the neglected body. The clinical depressions can be talked into submission with a decent psychiatrist, but the neglected body needs more than better food and not drinking and/or smoking. It needs blood tests and visits to a General Practitioner every three months, and visits to a dentist.
“An Update On My Recovery Progress…”, Me; May 11, 2008.

A New Year’s Resolution is a commitment that an individual makes to a project or the reforming of a habit, often a lifestyle change that is generally interpreted as advantageous. The name comes from the fact that these commitments normally go into effect on New Year’s Day and remain until fulfilled or abandoned.
New Year’s Resolution; Wikipedia.

Resolution: a decision to do something or to behave in a certain manner.
Definition: Resolution; WordReference.com.

“Life is full of obstacles – the street, dope, prostitution, etc. When you feel like you just can’t go on anymore, let someone else take you by the hand and point you in the right direction. Give yourself time and don’t give up hope.”
Text left on the wall of “Dans la rue”, a Montreal shelter for street kids.

The year of 2008 started off with teeth being pulled from my face and a diagnosis of type two diabetes, so anything short of being attacked by rage infested monkeys was going to be an improvement.

But it did improve, in very real and substantive ways. Over the course of the year I learned how to pay my bills on time, and haven’t missed any of them in seven… maybe eight months; I started to seriously confront the clinical depressions which have hurt me for so long; I started to go grey, which hasn’t sucked; I’m eating healthy, and; for the first time ever I had my parents over for dinner.

I also started riding a bike again; I got checked out at a sleep clinic; I only missed one appointment with my psychiatrist… maybe two; I only missed four… maybe five doses of my meds all year; I voted; my sleeping patterns are under control; I celebrated my birthday, as well as the second anniversary of my blogs, and; enough people voted for me that I came in fourth as Canada’s Best Health Blog.

Even with all of the emotions surfacing from my work on the clinical depressions, and the crap I had to deal with to get the diabetes under control, and the teeth being pulled from my face, this actually turned into one of my favourite years. I’m not sure if that would still have been the case if I had any investments… but I don’t, so… I guess that’s one more check on the “good news for me” side of the ledger. Score.

My Christmas list was pretty short this year… slippers and cash. My family has a mental block when it comes to my financial situation. Last spring my brother and mother teamed up to buy me a PlayStation3 and a few games. It cost them a little over $400. It came in the mail at roughly the same time I paid my rent… which came out to a little less than the cost of a PS3.

Buying me a game console was a great gesture. Paying my rent, meanwhile, would have allowed me to take the money and buy stuff I could use. Like an XBox360 and a couple of weeks of food. Last Christmas my mother bought me a $300 camera, which I’ve used everyday since. But that’s basically six months of heat and hydro bills.

So this year my parents asked for some ideas, what books or CD/DVD’s I’d like. And I gave them a list… cash, slippers, peace on earth.

Thankfully Santa thought I was a good boy — so basically my January rent has been paid. I also got a drawer full of black sports socks, a huge yellow ceramic peanut filled with peanuts, a set of dishes and a Rolling Stone magazine detailing the quick rise of Barack Obama.

So I’m going to town later this week to buy slippers.

Christmas is actually a calm time of year for my family. I can’t remember any serious drama beyond my grandmother trying to teach my mom how to cook a turkey five minutes before it was served. There is some general sulking the night before, and sometimes the day of Christmas. My grandparents, all three of them, get… nostalgic or melancholy, then the turkey chemicals kick in and it’s like having a house full of eighty-year old bipolar two’s.

This year my step-father tried to get them involved. After dinner he asked everyone about their favourite Christmas memory, or gift. My grandmother grew up in the Prairies during the Great Depression, so she used to get the same doll every year… like the actual same doll. But her mom would make a new dress for it. My grandfather said he couldn’t remember, but it was probably skates and a hockey stick.

My little sister had us over for a lunch the Saturday before Christmas. She and her boyfriend of three years recently moved into a clean, mostly affordable, mould and bug-free apartment just a few minutes outside of downtown Ottawa.

Which he can’t leave because he still has another eighteen months left to serve under house arrest from an assault conviction. They’re very much in love. They’re also both on disability and trying to recover from their own mental health issues.

My little sister has been pretty much on her own for the past ten years… or, depending on who’s counting, closer to twenty-six. She’s made remarkable progress in her own recovery. She sees a therapist regularly, and has cut all the alcohol and drugs from her life. I’ve tried to do what I can for her, but until very recently I was never in the position to be much help beyond advice.

She’s the most guileless, honest person I know. After the main group left my sister, her boyfriend and I played “The Game of Life: Simpson’s Edition” while my step-father took a nap. When he woke up we went to see the Ottawa Senators play against the Dallas Stars.

It’s New Year’s Eve and while it may seem like the thing to do, don’t be wasting your resolutions on your recovery.

It might seem counter-intuitive but you can’t promise yourself into better health just because making resolutions is a common cultural occurrence on a specific day.

Resolutions seemed important when I was a kid because the adults in the room seemed to believe they were. Especially when they’d ask me to make mine. But resolutions always seem to be made up on the spot based on what we can remember of the previous twelve months at that moment.

I cannot remember any resolution I’ve ever made. But I can remember deciding what the best first step would be to quit a two-pack a day, seventeen-year long smoking addiction; stop chewing my fingernails; reducing my diabetes blood sugar from coma-inducing levels to normal, and; learning how to pay my bills on time and in the correct amounts.

Making a promise to yourself is one thing. But we have to be ready to follow through, or to at least acknowledge how difficult the struggle to quit an addiction is going to be. I didn’t resolve to do, or stop doing all of those things. I was only successful because I was in a position where fixing a problem was something I was prepared for.

Making a promise to yourself because it’s New Year’s Eve is almost entirely meaningless. What power does New Year’s Eve have over your life two months later? People make promises to their God, or to their children because, chances are, those things mean something and will be around for some time. People who make resolutions to fireworks generally end up smoking “socially” by the end of January.

In fact a 2007 study followed 3,000 people after they made New Year’s resolutions. Of the entire group 52% initially believed they would be successful. A year later “only 12% actually achieved their goal”.

Besides, the promises we make to ourselves in order to fix a problem are basic and vague. It’s important to acknowledge the problems, and doing so in short statements like “I promise to be a better human being” is important only for the acknowledgement something was wrong.

Just saying “I resolve to become a better person” or “I resolve to take my medications regularly” is not the recovery. All of the little steps must be followed.

Anyway… resolutions are important, just not when they’re done out of a bizarre tradition of promise-making. Maybe instead of a resolution it’d be better to actually write out a list of what it will take to get the resolution resolved.

But it is the end of a year in… actually, I guess it’s another year in the lifespan of our civilization, society, culture. And it should be marked. So I hope each of us gets the peace of mind, the health of body we need in the coming year. And the strength and resolve to carry our recovery forward.

So, all hail to the good times. Now pick up your balls, and load up your cannon for a twenty-one gun salute…

There’s a YouTube here of AC/DC “For Those About To Rock”.
If you can’t see it please reload, then contact
Google and tell them to stop being evil.

...diagnosed with manic depression when I was nineteen, for the next 14-years I lived without treatment or a recovery plan. I've been homeless, one time I graduated college, I've won awards for reporting on Internet privacy issues, and a weekly humour column. In 2002 I finally hit bottom and found help. It's now 2022, and I have an 8-year old son, and a 12-year old son... I’m usually about six feet tall, and I'm pretty sure I screwed up my book deal. I mostly blog at saltedlithium.com....
View all posts by Gabriel... →
This entry was posted in Bipolar, BiPolar Christmas, Bipolar Disease, Bipolar Disorder, Clinical Depression, crazy people with no pants, Family, Health, Living With Depression, Living With Manic Depression, Manic Depression, Year In Review. Bookmark the permalink.