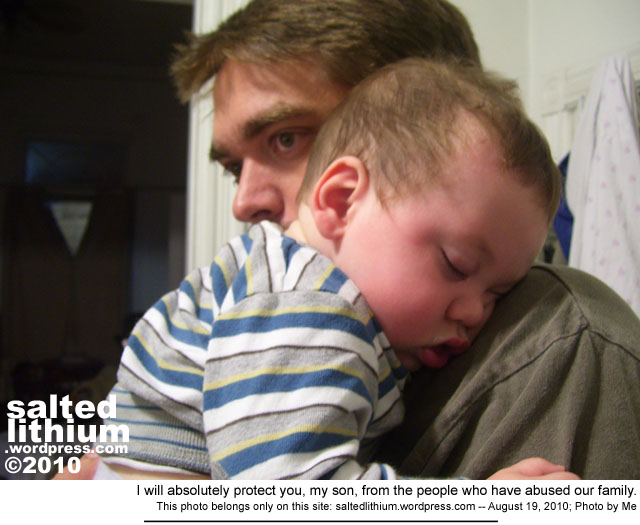 I will not allow my son to have contact with people who have abused me, my family or my friends.
My rule to anyone looking after my son — my father and grandmother are at the top of this list.

“Yes, in the presence of everyone, including you on Sunday. (sic) I made a deliberate point with his GG-mother that everyone in our family cares for Victor.”
Email to me from my mother justifying shoving my son into my grandmother’s face at a family BBQ on Sunday.

For six months I have had one rule regarding who can be around my son, and under what circumstance. It’s pretty simple, if someone has abused me or my family, they don’t get to be near my son.

It basically comes down to my father, and my grandmother. Both have abused my mother, my brother and myself in horrible ways, and I do not consider them to be part of my family anymore.

My mother has been pushing the boundaries of that rule for months. On Sunday, August 29, she finally broke it in a way that left my girlfriend and I both feeling livid and violated.

For the past week my mother has refused to apologize, or even acknowledge she has done something wrong.

Until my mother apologizes for her behaviour, and agrees to follow the one rule as my girlfriend and I have laid it out, any visits with our son will be supervised by either my girlfriend or myself.

We will not prevent my mother from spending time with our son, but we must know where he is, and who he’s with, and after what happened on Sunday, and the fact my mother refuses to acknowledge she did something wrong, we cannot trust my mother to follow our rule.

The problem, as it always has been in my family, is my mother’s relationship with her longtime abuser, her mother. My mother, at a Sunday family BBQ, and without the approval of either myself or my girlfriend, decided that she would use our son to make a point to her mother regarding something I don’t really even understand.

She sent me an email after I asked for an apology and, as best as I can interpret, she shoved my baby into the face of the one person I told her not to allow to be around my son, because she wanted to make a point to her mother about how loved my son was in the family.

In response her mother, as my son was thrust into her face, screwed up her face in disgust, clamped one hand around his mouth, and pushed him away. My mother didn’t seem to see this, she just turned around, walked back to me and handed me back my son.

In fact, the look on my mother’s face during the entire episode was just truly bizarre. I haven’t been able to adequately describe it even to myself… almost a mix of hate, disgust, pride and a few other things. Like, if she were talking, she’d have my son jammed under her abusers nose and saying “look at this you old bitch, look what I’ve got”. Or something. I haven’t figured it out yet.

Her eyes, however, were focused and unblinking. Her eyes looked, if anything, manic.

It was not a moment, as I said, that my girlfriend and I wanted or expected to happen, under any circumstances.

When we finally got out the door with our son, my girlfriend’s first words were “what the fuck just happened?”.

My mother agreed to my rule, told me she’d follow it. Told me if there was a family event, and both her mother and my son had to be there, that the family would “shun” (her word) her mother.

My girlfriend and I were only at the BBQ on Sunday because we believed there would be a separation, that her mother would be “shunned”.

And for the two hours we were there, it worked perfectly. Her mother stayed away from my son, no one made any attempts to bring the two together, it was exactly what we hoped it would be. Then my mother lost her fucking mind.

We knew she had lied to us on a few occasions about having our son near her mother. She would constantly ask us if it would be okay:

“I’m going to take Victor and visit with my father.”

“Okay… will your mother be in the room?”

Then she’d roll her eyes and, if she were talking to my girlfriend, she’d say “well, I’ll ask Gabriel”. Or, if it were me, she’d tell me her father is dying, and won’t have a lot of time left to visit with my son. Then tell me a recent anecdote regarding her mother’s oncoming dementia.

The ‘dementia’ thing is something my mother started talking about after my ‘discussion’ with my grandmother, it’s my mother’s way of telling me “the ‘outburst’ wasn’t deliberate, so it’s okay to have your son around my mother.”

So there were times we knew, without being told, that my mother had our son in her mother’s presence. But after we ignored one instance, we’d make our point a little more forcefully the next time my mother asked to go visiting with our son.

My mother has been abused by her mother for sixty years because my mother was conceived before her parents were married. In other words, her parents got married because her mother got knocked up.

As a result of the abuse — some physical, almost entirely manipulative — my mother has been desperate for her mother’s forgiveness for having been born. It’s not an uncommon behaviour for long term victims of abuse.

Just before my mother took my baby and shoved him into her abusers face, she actually passed out bags of crab apples to all of the women present, and in the bag was her mother’s recipe for crab apple jelly. She told everyone in the house how proud she was her mother won an award for the jelly at our local fair, and how much I had loved it when I was younger.

She was standing a few feet away from her abuser — from the woman who abused her, her brother, her two sons and even her father — bragging about her abuser’s crab apple jelly, and then not ten minutes later grabbed my son, and shoved him into the old evil bitch’s face to make a point about how everyone in the family loved my son… and, what?

“Everyone cares about Victor except you”, is that it? Well fuck you, and fuck you. I don’t want her mother to love my son, or even acknowledge my son. She lost that right when she demanded I get a paternity test, told me I should have forced my girlfriend to have an abortion, and told me I was just waiting for my grandfather to die so I could collect an inheritance.

A few years ago my mother almost convinced herself she had been adopted. Her mother took out her will one night, about twenty-five years ago, and made a point of showing my mother that the farm she loved so much was going to her brother. My mother was to only receive $25,000 because, her mother told her right to her face, it was expected that my mother would be a bag lady.

During our little chat her mother told me “don’t make the same mistake I did”, meaning “you should have had an abortion, like I should have”.

And she still believes it to this day… . And still my mother is searching for forgiveness.

I’m bringing this stuff up because I’m just… stunned, outraged, betrayed, confused, pained, because I look at the abuse my mother has suffered through, and have to ask myself why she’s so willing to just take another cut. She’s not going to ever convince her mother of anything.

Her abuser is going to die, soon. And my mother will have never once held her abuser truly accountable. I love my mother. I do not want to hurt her. My hands have been shaking, and there’s a huge hole in me because of what I think I’m doing to her… and also of where I think this situation could go.

My mother cried when I told her about my chat with her mother. That night my mother made promises to me, regarding my son, that she has not kept.

So my girlfriend and I have told her she is allowed to visit with our son whenever she wishes, day or night. We want her to have as much time as she’d like with her grandson, and we’ve never said no to her, and we never will.

But until we receive an apology for what she did at the BBQ, and until she promises to never break our rule again, the visits must include either my girlfriend or myself.

At this point it has been a week since my mother and I have spoken, a week since I’ve asked my mother to apologize, and three days since my girlfriend and I laid out the consequences of not promising to follow our rule.

To date the last contact I’ve had with my parents was a short conversation I had with my step-father where he tried to tell me that, as my son’s grandparents, they “had a right to have Victor around whoever they wanted”.

Bullshit. They don’t get to have my son around my father, or my grandmother. No one who has ever abused my family, or me, gets to be near my son. They. Do. Not. Deserve. Him. Period.

...diagnosed with manic depression in 1989, for the next 14-years I lived without treatment or a recovery plan. I've been homeless, one time I graduated college, I've won awards for reporting on Internet privacy issues, and a weekly humour column. In 2002 I finally hit bottom and found help. I have an 8-year old son, and a 4-year old son... I’m usually about six feet tall, and I'm pretty sure I screwed up my book deal. I mostly blog at saltedlithium.com....
View all posts by Gabriel... →
This entry was posted in Clinical Depression, crazy people with no pants, Depression, Granny, Health, Intervention, Living With Depression, Living With Manic Depression, Manic Depression, Mental Health, Zombies. Bookmark the permalink.

The Bipolar Writer and J.E. Skye