Lamenting Over The Missed Birdies Of Yesterday 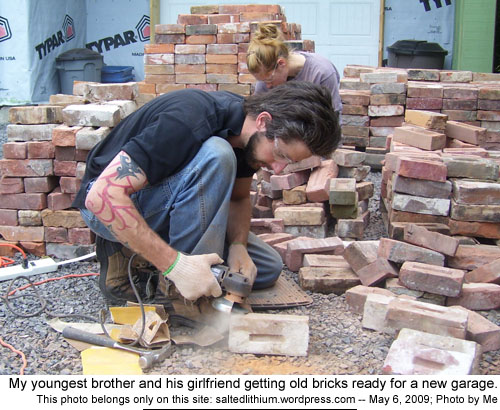 I was in Ottawa for a few hours on Wednesday with my grandfather. He’s going to be 87-years old soon, so when he takes me places the journey is the adventure and arriving has become slightly more optional.

My grandfather and I have spent a lot of time together since I moved back here so I’ve seen the health of his body and mind decline. There have been a few mini-strokes resulting in a decline in his language skills, and there are times when it seems like he’s losing the ability to walk. But that’s mostly age related.

The evolution of his walking over the last few years has taken him from a bracket to a question mark and now he mostly resembles a reversed seven. But he’s still willing and able to get out of his apartment and just go someplace. As long as we’re driving.

We sat in a diner and talked over coffee and Diet Pepsi about the stock market a few days ago — the stock market has been his sole income for almost twenty five years now — and everything he said made sense, but he couldn’t get the numbers right. A few years ago that kind of thing drove him nuts, and he’d fight to find the right word or number, but now he’ll say “60” instead of “10,000” and not miss a beat.

On the way up to Ottawa on Wednesday we stopped at a Tim Horton’s so he could have a coffee and a nap. Usually he naps for thirty minutes in between breakfast and lunch, then again in the afternoon. So, when I’m with him, and he’s napping in the car, I usually go for a walk.

This time I ended up sitting on a picnic table in front of the car. When he woke up he started the car, and gave me a little honk to get my attention… but the engine continued to rev up until the little thing must have been red-lined. When I opened my door the engine finally fell back to where it should have been, and he asked me who the lunatic revving their engine was…

…of course it was him, he had accidentally put his foot on both the brake and gas pedals when he started the car. Then, when he looked around to find the revving engine, he pressed the pedals even harder.

There’s also the cataract in his right eye, which is getting fixed in June… and Veteran’s Affairs is supplying him with new hearing aids because his hearing is down to 20% in one ear, and 75% in the other.

He knows he’s getting worse. And the worse he gets the more he wants to fix the things he hasn’t been able to, but the worse he gets the less he’s able to figure out how to fix those things… and he’s even forgetting what it was he wanted to fix. So all he’s left with are the things immediately surrounding him, and a vague feeling in the back of his head that something’s wrong.

We were in Ottawa visiting his younger brother, who lives in an “assisted living facility” downtown. It’s something we do every couple of months. My granduncle is, like my grandfather, basically healthy. There’s no cancer, or heart problems, neither of them take handfuls of pills, basically they’re just slowing down. But whereas my granduncle has become satisfied with having a large television and a fantastic mechanical chair, and having his five daughters visit occasionally, my grandfather is immensely dissatisfied with how his life has turned out.

He wants his friends back, he wants his family to be more like the one his younger brother has — he wants a closeness our family has never had. He wants his opinion to mean something again on matters which matter. But it’s too late, and he knows it…

It’s strange being around the elderly for extended periods. When I watch the other grandchildren visiting their elders, you can tell they just assume the old people are as self-aware as three-year old kids. But over lunch with my grandfather and granduncle they started talking about suicide like I would with people who have manic depression.

They both live in assisted living facilities, and both have stories about other residents killing themselves. My grandfather has made jokes about the ceilings at his facility not being high enough to hang from. But the discussion on Wednesday actually got into specifics, and best techniques… and discussing them like they were talking about the best way to pour a foundation.

Earlier that day, for example, my granduncle had coffee with a fellow resident who had sliced his wrist up a year ago, and would have died in his bathtub if his ex-girlfriend hadn’t shown up — the guy with the scars on his wrist is 93.

The reasons were, they agreed, all the same… loneliness and a severe degradation of their abilities.

I don’t think my grandfather is suicidal. At least not to the point where it’s an option. But I think he might be on the verge of giving up, and I think the last straw for him will be his rapidly deteriorating golf game.

When they were both living in Ottawa, and in their 80’s, my grandfather and his brother used to play golf together sixty or seventy times every summer. One of the local TV stations did a story on them in 2004. But my granduncle’s health deteriorated pretty quickly, until he was hospitalized three years ago and finally wound up living at the downtown facility.

During the years they played golf together my grandfather had someone to be active with, to get outside with, an excuse to get away from my grandmother and something to talk about.

Without his brother around my grandfather’s health deteriorated, and he had a series of mini-strokes which took away some of his language ability. But he found a golf course close to his assisted living facility, and a large group of retirees from the area to play with. So two summers ago, at the age of 85, he played sixty games, and last year — with a cart, he played forty games… albeit both years he only played the front nine.

During the off-season my grandfather melds with his easy-chair, there’s very little for him to do, and his hearing problems make conversations in groups almost impossible. It’s rare for him to get out of their apartment. But out on the course he’s alone with three other men, most of them former engineers / professionals — the person in charge of organizing the games is a retired chemical engineer, and a friend of my moms. So he can tell his stories to people who can understand them.

But this year is not going well. My grandfather and I have been out to the driving range three times this year, so he can practise his swing, and he’s talking about quitting because he can’t get the ball off the ground. I’ve never seen him this discouraged… I don’t think I’ve seen him discouraged, period.

His body won’t operate like it used to, he’s losing the ability to drive to Ottawa and Montreal to visit with his remaining work friends, his brother is dying, his sister is too far away to visit and now he’s worried about looking feeble in front of his golf friends…

He and I get together once a week for lunch, and I’m hoping the driving range becomes a part of our routine, but his horizons are shrinking fast and he knows it.

...diagnosed with manic depression when I was nineteen, for the next 14-years I lived without treatment or a recovery plan. I've been homeless, one time I graduated college, I've won awards for reporting on Internet privacy issues, and a weekly humour column. In 2002 I finally hit bottom and found help. It's now 2022, and I have an 8-year old son, and a 12-year old son... I’m usually about six feet tall, and I'm pretty sure I screwed up my book deal. I mostly blog at saltedlithium.com....
View all posts by Gabriel... →
This entry was posted in Bipolar, Bud, Clinical Depression, crazy people with no pants, Health, Living With Depression, Living With Manic Depression, Manic Depression, YouTube. Bookmark the permalink.

7 Responses to Lamenting Over The Missed Birdies Of Yesterday