Friday Conversations With My Psychiatrist | February 12, 2010 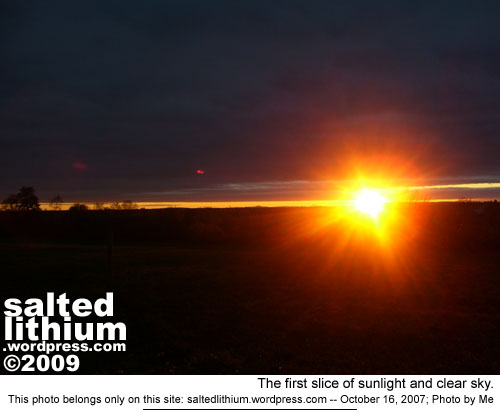 My recovery has reached a strange place… I did spend most of last year depressed, but that was mostly due to the panic and lack of sleep stemming from my girlfriend’s high-risk pregnancy. But I haven’t had a bipolar episode of mania or depression in over a year.

Which is starting to create a dilemma.

During the pregnancy I had no time to really consider where I was in my recovery, because I never really felt recovered or recovering.

But over the past few weeks I’ve been progressively more concerned about what happens when I sit down with my social worker, and he asks me how I’ve been. Or, what happens when my psychiatrist asks me something like “why don’t you get a job teaching writing?”.

Which is exactly what happened during our last appointment.

I do know I’m not ready to work. At least not full time, or at a job where consistent results are necessary to receive a paycheck. I still have many of the behaviours associated with eighteen years of both untreated manic depression, as well as several clinical depressions. Plus, I still have a very difficult time being around people.

But so do a lot of people who make up the Canadian workforce. So why am I still on a government disability support program, while they commute twice daily?

I don’t think my doctor meant to ask the question. Which might make it worse. We did talk about it for a few minutes, and I gave him all the reasons I’d be completely unqualified to teach… which basically came down to ‘my grammar sucks’. He disagreed, but I stuck to it.

We also talked about a post I wrote a few weeks ago about Scientology’s bizarre adventures in Haiti, and elsewhere in the third world. The Xenu People have brought their paranoid, psychiatrist-hating brochures and ‘touch therapy’ to poor and devastated countries all over the world. They’ve also brought a significant amount of money, which they’re using to build little Scientology schools so they can teach poor, hungry kids all about Tom Cruise.

Once you scratch away the celebrity veneer, and get into the deeper layers of this money Cult, the more warped, bizarre, unbelievable and dangerous their beliefs becomes.

Sometimes I think my doctor lets me talk about certain topics just to see how weird I get. I know he’s been keeping track of how I react to the tick-tock of his wall clock.

Something I’ve been having real difficulty with lately has been memory and concentration. I’ve been forgetting words, plans, deadlines and appointments. I’ve also had a hard time concentrating on self-imposed projects. I’ve been trying to write something about Jenny McCarthy and the MMR vaccines since it was announced Lancet was retracting a deeply flawed study from fifteen years ago.

I’ve managed to do the research, and I have close to 800 words in notes, but when I sit down I just can’t concentrate. I end up reading news and sports and doing Facebook crap instead.

Yet… here I am writing a piece that involves having both memory and being able to quickly recall events.

My psychiatrist (I just forgot how to spell psychiatrist) thinks the memory and concentration problems could stem from the untreated type-2 diabetes as much as the bipolar stuff.

He asked if I were taking care of the diabetes, or even myself in general. I said “no”, I was pretty emphatic. I have started taking the Metformin and Glyburide regularly again, but I haven’t checked my blood sugar levels since the summer. I’ve also been eating a lot of fast food since the summer.

But, along with the pills, I have started shopping for groceries again. So my diet is getting progressively healthier.

You know what’s really unhealthy? Not feeling attached to the people around you. Which is something I have a very hard time with. We were talking about how I find being with my girlfriend feels unnatural. It feels like something I have to do, rather than plan out. It’s not specific to her, it’s how I’ve felt in every relationship I’ve been in… but especially the romantic ones.

Once I’m in a relationship, like once a non-casual relationship has been established, I normally start looking for ways to not be around the person. The reasons are a little complicated, and trust plays a huge part, but blackmail also plays a part — basically there comes a point in the relationship where I start pulling back, to see how far forward you’ll lean… that’s part of it.

The trust thing is the larger issue. And sex was brought up. I have a very difficult time with sex, both the act and talking about the act. Anyway. We talked about it, we’ll talk about it again.

And that was pretty much it for the hour. I did talk about the stress of having to deal with my girlfriend’s ex-husband four to six times a week. Just having to think about the fuck stresses me out. But it’s something I have to do for a little while longer.

And, finally, we talked about Victor.

My next appointment is in two weeks, but then it’ll be another month before we see each other. This is the season for him to take his vacation, and to attend conferences. I hope it’s not because he doesn’t think it’s necessary to see each other as frequently…

...diagnosed with manic depression in 1989, for the next 14-years I lived without treatment or a recovery plan. I've been homeless, one time I graduated college, I've won awards for reporting on Internet privacy issues, and a weekly humour column. In 2002 I finally hit bottom and found help. I have an 8-year old son, and a 4-year old son... I’m usually about six feet tall, and I'm pretty sure I screwed up my book deal. I mostly blog at saltedlithium.com....
View all posts by Gabriel... →
This entry was posted in Appointment Day, Bipolar, Bipolar Disease, Bipolar Disorder, Clinical Depression, crazy people with no pants, Disability, Health, Living With Depression, Living With Manic Depression, Manic Depression, Mental Health, Pregnancy, Psychiatry. Bookmark the permalink.

8 Responses to Friday Conversations With My Psychiatrist | February 12, 2010