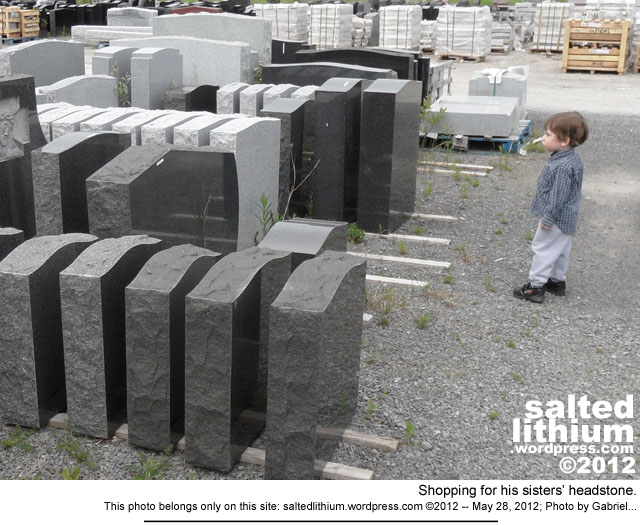 We’re celebrating my grandfather’s ninetieth birthday this week. I’m having a hard time believing we’ll be doing it for ninety-one next year.

There was a fire recently that left him and my grandmother homeless. At the moment the most likely cause was a lightning strike that started a small, but very smokey, fire on the third floor of their retirement home. Two of their friends, a couple, died trying to escape.

My grandmother, who was making my grandfather a late night sandwich when the fire alarm went off, got out with just her nightgown. My grandfather has been down on himself for not stopping to grab something on the way out.

But there was no time. A few days before the fire there had been a fire drill. So, when the alarm went off for real, the staff ran door to door, making sure everyone knew it was the real thing. So, with the alarm going off, and a staff member yelling at them to get out, my grandparents didn’t have a lot of time to think.

In the rush to get out my grandfather also hurt his thigh, we’re not sure yet, but it sounds like a pinched nerve. At first everyone was forced to wait outside in the cold and rain, and then they spent a few hours on a school bus watching their home get destroyed.

They spent the first two nights with my uncle, the washroom in my mother’s home is on the second floor, and my grandfather can’t do stairs anymore. My grandmother can get along okay, but up and down a staircase every thirty minutes would have been too much.

My mother found them a room in a retirement home here in my village, but it’s about the size of a modern jail cell.

I’ve been visiting them every day, not for long, but long enough to see that my grandfather is suffering. He can barely walk now, he needs help showering, he’s using a walker for the first time and, to get to and from his meals, he’s using a wheelchair.

I was able to get into the damaged retirement home, to get some of their things, including a pocket-sized cross that has been in the family for 200 years. When I brought it to him tonight he was laid out in his bed, his pant legs pulled up, exposing bruises upon bruises, each one darker than the last. His arms and hands were almost entirely black from bruises, all caused by blood thinners and falls.

He fell three times on Tuesday, and two more times on Wednesday. Tonight his face was grey, his voice was hoarse, and he couldn’t raise his head from the pillow. He did perk up when I handed him the cross.

It’s as though, since the fire, he has aged ten years.

Ninety-years old is a strange time to be starting over from nothing. Or almost nothing. But for my grandfather it’s not about the things he has lost. He finally had his flat screen TV, with a DVD player and sound system. He had his special chair from Veteran’s Affairs, with its remote control and lift action. And he had his computer.

For someone who spent a lifetime doing the things he did — travelling the world working as an engineer on hydroelectric dams and mega-projects — it’s not really that much. He’s always been a purger. He used to keep intricate notebooks, at the end of every day he would write about the weather, what he had done, who he had seen, memories of conversations, drawings, designs for equipment, but he only kept them for so long.

When my mother found out he had been burning them she, being an archivist, freaked. So, instead of having sixty or more years worth of his notebooks, we only have a few years worth. Because, to my engineer grandfather, the notebooks were taking up too much space.

He has some photos of the projects he worked on — including Churchill Falls and Rogers Pass. But that’s it.

What my grandfather lost in the fire was his independence, and his community. It was just last year when my grandfather finally put his foot down and insisted he and my grandmother get separate rooms. Getting his own space gave him back several years, he was younger, he could walk when he wanted to, watch his shows, and avoid having to listen to the constant passive aggressive nagging machine that is my grandmother.

My grandfather has always been a big man. He grew up dirt poor in the middle of seven kids. He was tall and strong and was a star hockey player. Before age started to bend him he was over six-feet tall, and always a healthy 200lbs. While he worked as an engineer he also had a hobby farm where he raised beef cattle, and designed and built his own tools.

Now, I’d be surprised if he was more than 130lbs. But he was the same weight three weeks ago, and he was healthy. He looked healthy. He was slow, and shaky without his cane, but he was able to push on. To get where he wanted to go.

But now, trapped in that little room, he has nowhere to go. His leg hurts too much to walk far, he has to contend with the great black hole of despair that is my grandmother, constantly pushing him. Being a constant negative presence.

It’s the community that the misses. He has the means to buy new stuff. But what he misses are the people, the staff, the women he used to flirt with. Having a place to go, to escape to, when it got too noisy. Having plans. He loves having plans. He carries a little leather black book, the same book for as long as I’ve known him, he just changes the date book insert. In it he plans his week, his month and even his year.

Before the fire he played bridge two or three times a week. But now his group are scattered all across Ontario.

He has lost touch with the couple he shared his meals with, three times everyday, for six years.

And now, when he has people over, my grandmother directs the conversation. She interrupts him, which he hates, and asks him to repeat himself until he finally shuts down.

My grandfather and I became close when we were both living in Ottawa in the last part of the 90’s. I was taking the journalism program at Algonquin College, and somehow I became his computer expert. But he taught me how to drive his tractor when I was nine.

Being close to him, when I was a child, was as close to a father as I would get. It wasn’t much, we only saw each other for a few weeks in the summer on his farm, and again at Christmas. But it was everything to me at the time.

When I moved back to my home village, in 2003-ish, he moved from Ottawa to the next town over from my village, to the retirement home. And we’ve been having regular lunch dates ever since. Mostly we talk politics, hockey when it’s in season, and family stuff.

For the past two-and-a-half years we spend a lot of time talking about my son, who I named after my grandfather. I take as many photos as possible of the two of them together.

We’ve rented* a beautiful bed & breakfast for his birthday party tomorrow (Thursday) night, and most of the family will be there. My brother, his wife and their son can’t be there, but most of his other grandkids will be — I think one of my cousins is working in Yellowknife. Plus his golf buddies, and some of his more mobile friends from the retirement home.

It should be a large, loud gathering. I really would like to do it again next year.

*My parents and my uncle have rented the B&B, we’re just showing up with smiles and a card.

...diagnosed with manic depression in 1989, for the next 14-years I lived without treatment or a recovery plan. I've been homeless, one time I graduated college, I've won awards for reporting on Internet privacy issues, and a weekly humour column. In 2002 I finally hit bottom and found help. I have an 8-year old son, and a 4-year old son... I’m usually about six feet tall, and I'm pretty sure I screwed up my book deal. I mostly blog at saltedlithium.com....
View all posts by Gabriel... →
This entry was posted in Bud, Clinical Depression, crazy people with no pants, Depression, Granny, Health, Living With Depression, Living With Manic Depression, Manic Depression, Mental Health and tagged Churchill Falls, Family, Rogers Pass. Bookmark the permalink.